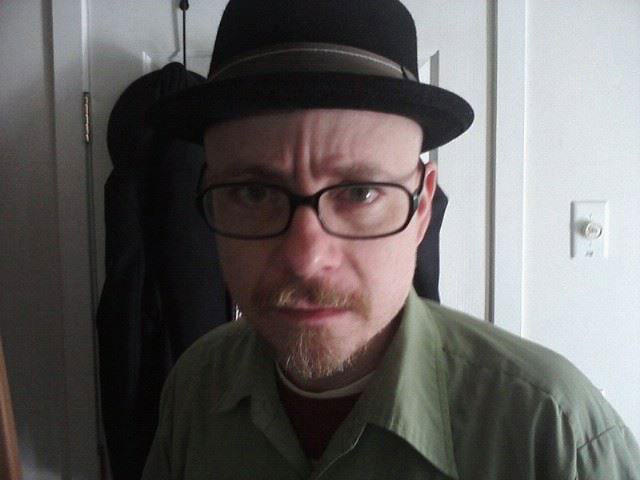 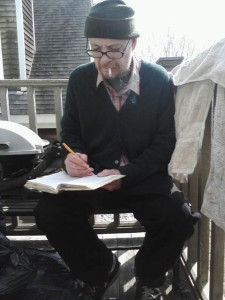 We’re up in the balcony of the Lowell High School Auditorium, Brad Moore and I, and we’re leaning over the side as we watch the LHS band (my sister is on clarinet) accompany the Spring production of “Oklahoma!” It’s May of 1980 and Brad is telling me about the Dead Boy.

The Dead Boy is from the book “The Shining” by Stephen King. Up until then I’d read everything the school had assigned me as well as everything in the school library. But certainly nothing from outside. Brad had read “The Shining,” however, and he’s eager to fill me in on all the details. Of Stephen King he says, “He knows what scares you.”

The scene with the Dead Boy wasn’t in the movie. Out in back of the Overlook Hotel, in the snow-blanketed playground, was a series of cement rings kids could crawl through. Danny Torrance went out there one day, burrowed into one of the rings and had a strong sense that he wasn’t alone in there. 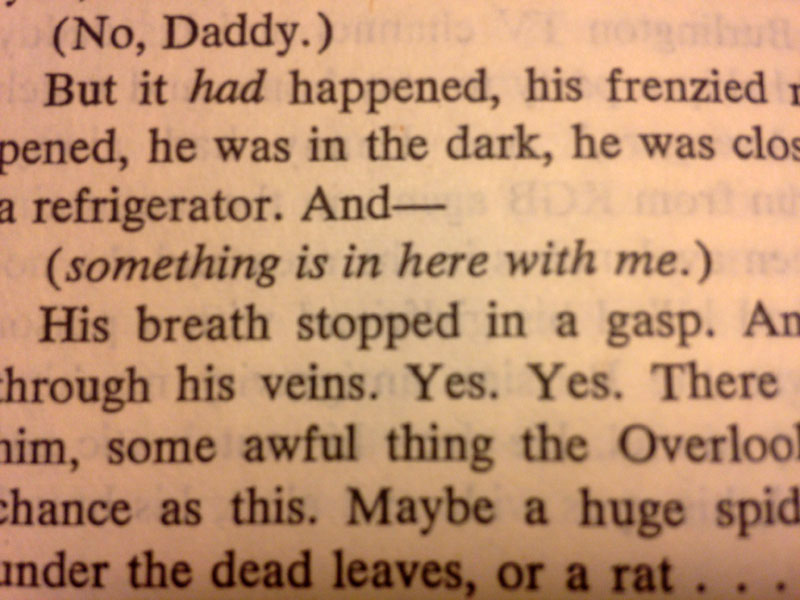 As if that weren’t enough, then Brad tells me about the Woman in Room 217 and I determine that I will read this book myself. That weekend I buy a hardcover version of “The Shining” and proceed to read it several times over the past 30 years.

Brad is the only child of a swingin’ divorcée mother, Betsy. She is a beloved music teacher at the Robinson School who’d had Brad at the shocking age of 24. What is Betsy now, all of 35? Our own parents are old. Not only that, but the two of them live in an apartment. Betsy talks to Brad like he is an adult and sometimes he talks to her in ways that, if we had dared say those things at home, would get the everloving shit kicked out of us. By junior high, all of Brad’s friends are hanging out at the Moores’ place.

Brad later turns me on to Mafia assassin books, Charles Bukowski (It’s only OK to start reading Bukowski between the ages of 11 and 15), and John Kennedy Toole’s “A Confederacy of Dunces,” published posthumously by the suicide’s mother.

What had turned Brad onto these books before he’d even started shaving? I never asked. But to Brad I owe Reading for Pleasure. He reads everything. And when he doesn’t understand something, he asks his mother.

One day I am over his house and he casually asks his mother what a 69 is. He’d read it in a book. I am about to answer that it was the year we were born, Stupid, when his mother calmly delivers the alternate meaning. Who knew? I still use that information today!

The next year the 3-D movie “Comin’ At Ya!” comes out. I am all excited to see until I learn it’s rated R. 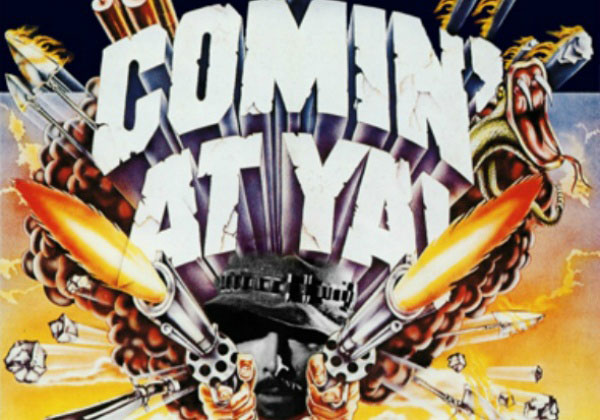 “Because you never know what’ll be comin’ at ya,” he says. And that’s all I can remember of Present Tense Brad: He is really smart, and really funny, and he really sent me on my way.

We drifted into different groups after junior high but we had some mutual friends, and when Brad and a bunch of them moved down to Martha’s Vineyard I would often visit. He’d stay there for the next 25 years, working in restaurants, renting tiny apartments and trailers, doing “the Vineyard Shuffle” when high-paying summer people edged out the year-rounders for living space.

I always told Brad—who’d since adopted the name “Buster”—what a singular gift he’d given me by inspiring me to search for books on my own. Sometimes he was gracious about receiving a compliment, sometimes he was drunk. But I also wondered what it was that kept such a talented person on that little island when his notebooks full of drawings and stories and poetry were a lot better than most of what I was reading for fun.

Then I didn’t pay as much attention. Most of us had moved away. There were even a couple of times I went to the Vineyard and didn’t let him know I was there. He could be a bit of a thundercloud and by that time I had kids with me. But even this year, when I tried to nudge my fifth-grade daughter to read more, I told her the story of Brad and “The Shining.”

Women loved Brad. He had a big, easily-wounded heart. He’d write them poetry and send them to work with it in their pocketbooks. He was aware of the gravitational pull of both his depression and joy. There were regular breakups of friends and girlfriends, but he was always someone who needed to be reckoned with.

This winter was hard in Massachusetts. It was the snowiest winter since the dinosaurs died, apparently. Brad was aching over a breakup and he was alone with his cats in an unheated trailer. He’d also been laid off from a scarce winter job. He may or may not have been drinking. He called his mother every day.

“He was my right arm,” Betsy, now 70 and living in South Carolina, says. “It was the two of us against the world for 40 years.”

My friend Bart from home came to visit me here in Los Angeles in February, partly to escape the snow back east. We talked a lot about Brad and the straits he was in. We shook our heads at his Woman Troubles. Bart let me borrow a mix CD Brad had made.

April 5 was Brad’s birthday and Bart insisted I text him. I told Brad I was his new dad along with another unwholesome thing involving someone we knew a long time ago. I was delighted that he wrote back.

April 17, as Betsy was driving home from Savannah, she got a call from a 508 number. It was a sergeant from the Massachusetts State Police.

The trooper suggested Betsy pull over, and then he told her that the cleaning woman for the front house had gone out for a cigarette and found Brad behind his trailer. He had hanged himself. Betsy and Brad had just talked on Monday. The mortuary guessed he had done it on Wednesday. The sergeant then read part of the suicide note over the phone. It had something to do with closure with an ex-girlfriend.

His friends assure Betsy that Brad was simply not himself. The winter, the cold, the poverty, the heartbreak, the shame were too much. Eliminate one and maybe Brad would still be around. Add 50 bucks, a good meal, a sunnier day—who knows? One friend remarks that Brad had been threatening suicide since freshman Algebra in 1983.

Oddly enough, when we began the process of calling faraway acquaintances, everyone we reached admitted that it was not Brad, but another mutual friend, whom they expected had died. And when we reached that guy to break the news, he said, “What do you want me to do about it?” It underlines the point that depressed people sometimes drive us away. Sometimes it is uncomfortable for us to be around them because our own happiness is so precarious. It’s only when they’re gone that those feelings give way to the regret of not having done some simple thing. For example, Brad had returned the ball on his birthday; why hadn’t I texted him back?

Sometimes Betsy would send him care packages of all the food in her pantry. The postage to send it to the island would cost more than the value of the food, she said, but she didn’t want him to give up. Just make it through the winter…

“He told me he would never do it,” Betsy says. “How could he do this to me? I feel betrayed. But then I tell myself it’s not about me.”

Yeah, it is about you for as long as you need it to be.

I know that Brad’s cats are being taken care of. I know that the contents of his trailer will be carefully considered and parceled out by his Vineyard friends (if there’s a copy of “The Shining,” I’d like it). I know his mother will get his notebooks with all his writing, and maybe she will have the work published.

What I don’t know is what could have been done differently, other than erasing the breakup, erasing the winter. Friends visited him, drove him places, loaned him money, took him to lunch, held his hand. The fact that Brad didn’t worry about leaving his cherished cats without a disposition plan would suggest—correctly—that he knew people would take care of them. How did he know the cats would be OK but not himself?

I think about descriptions of waterboarding—how its victims know intellectually that they are not drowning but their bodies still think that they are. People always made a point of telling Brad how significant in their lives he was, but for an hour or so on Wednesday, his body thought it was drowning, even as he coolly wrote a note, placed it precisely on the kitchen table, selected his equipment, closed the door behind him, and killed himself.

The story doesn’t end neatly, but just out of curiosity I open the last pages of “The Shining,” which don’t resolve in the Colorado snow, like the movie, but on a dock on a Maine lake in the summer.

Stay close, because Remember: you never know what’ll be comin’ at ya.

Brad will be memorialized on Martha’s Vineyard on June 14 with a potluck, which is just perfect. Donations for his cremation and the memorial and the storing of his archives can be made here.

1 thought on “This Inhuman Place: So Long, Brad Moore”