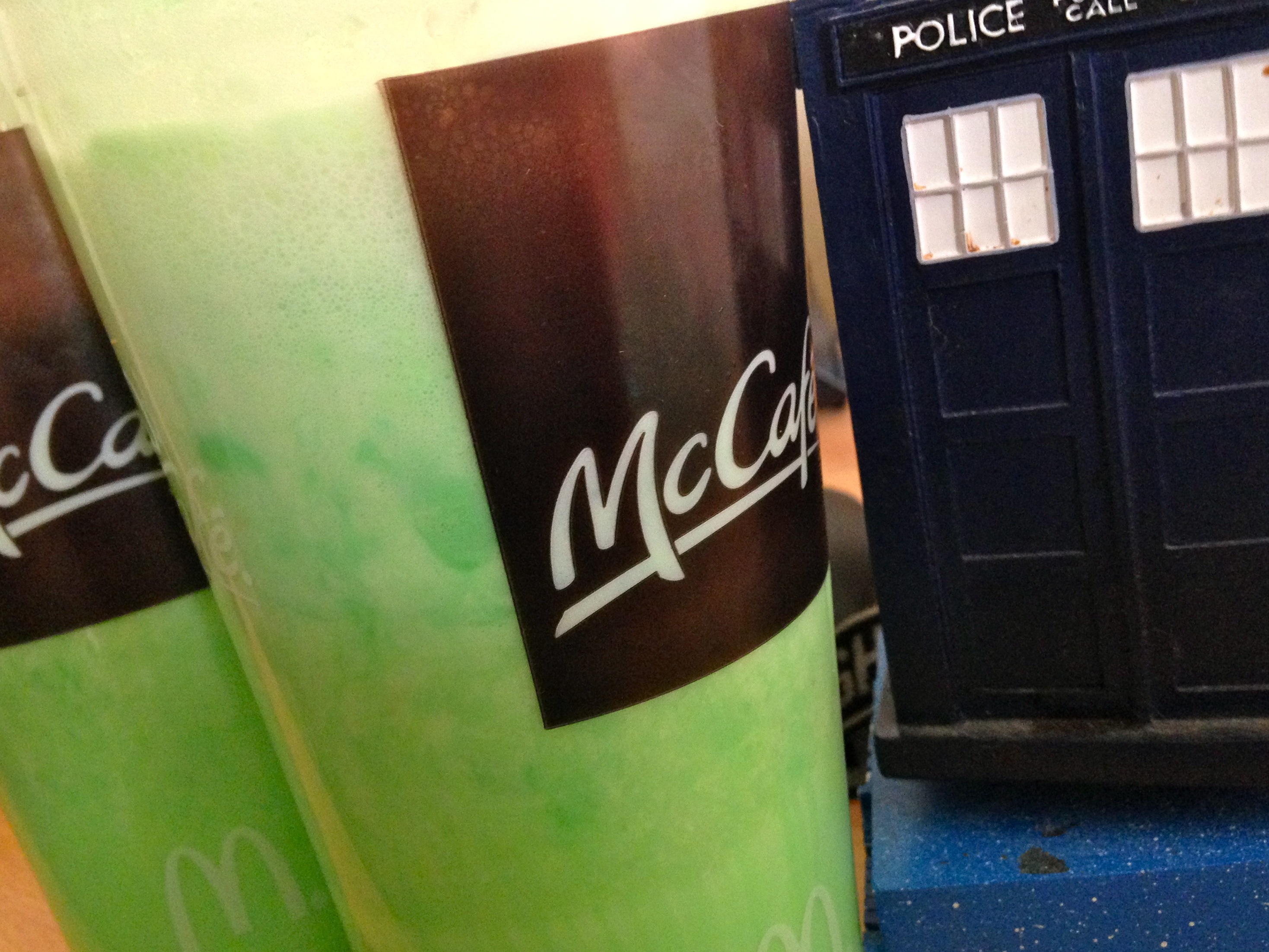 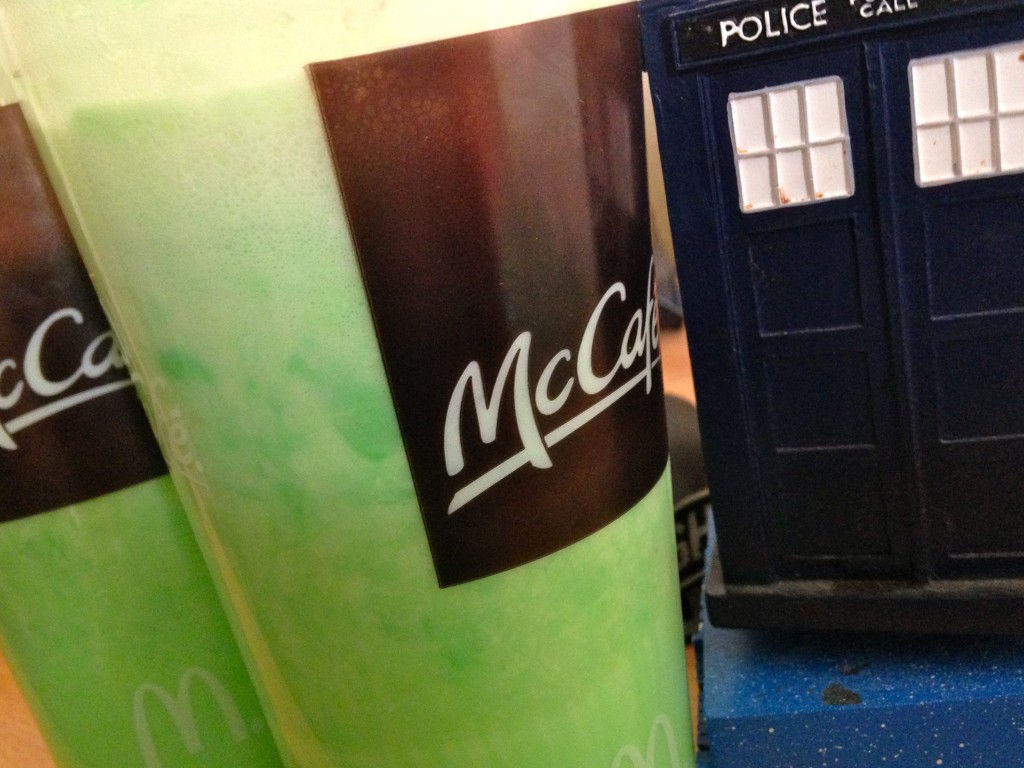 I’d been telling my children for a week that, by St. Patrick’s Day, they’d be getting Shamrock Shakes. And not just two of them, like when we go through the McDonald’s drive-thru once every three months and I stoically buy them two ice creams and eat none myself because I Don’t Support McDonald’s. We’d each have one and we’d drink the whole goddamn thing. Buying a Shamrock Shake is a cultural birthright of the kind of Irish Americans who don’t have a framed picture of John F. Kennedy in their home and who also think the Dropkick Murphys have had their time.

(Not the least bit untalented, but still Smashmouth.)

I once did some website work for a Los Angeles store that imported Irish goods, like Barry’s Irish Tea and Waterford crystal. The proprietress couldn’t stand people who identified as Irish-American. “I’m from County Cork and I’ve only eaten corned beef and cabbage once in my life,” she said. “And that was here.” But it was people like me who wore claddagh wedding rings (at one time) and liked the sound of the word “rashers” that kept her in business. The only Irish person other than herself that I ever saw in her store was the 70-year-old bartender from Tom Bergin’s Tavern — allegedly the model for the character of Coach on “Cheers” — who’d come in every week to buy a Cadbury’s Flake bar.

The only time I remember having a Shamrock Shake was 36 years ago, and it was disgusting then, too. I told my children this and they nodded solemnly. “But you still want to try one, right?” I said, and they said “Yes, absolutely.”

So it loomed above the weekend’s errands. We went to a play in Beverly Hills on Friday and it took 90 minutes to get there on Santa Monica Blvd. where no McDonald’ses dwell. So there went that opportunity. On the way back I convinced them that we should eat something resembling a healthy meal at the House of Pies, and they were too stuffed afterward to want a shake (they also go to bed when they’re tired and turn off the television when they think the programming is beneath them).

On Saturday we had to go to the hardware store, Costco, a school function, and a birthday party, but in all that driving we didn’t see a single McDonald’s. Even my thoughtful children were getting antsy; I could see their bony knees twisting this way and that as we passed Carl’s Jr. (I imagine a quivering and self-conscious Carl, Jr. who sought approval from a distant father. “I’ll honor his name with this burger franchise and then he’ll love me.” Fool!), Jack in the Box, In-n-Out, Burger King, and even Wendy’s. The Annie’s Sausages samples at Costco did little to placate them.

Finally I saw a McDonald’s and we swung in.

You would be right in wondering why both I — who had tasted them — and my children — who had been told by someone they trust that Shamrock Shakes are repellant — would be so excited to put them in their faces. It’s all because of Buckley’s Sirop. 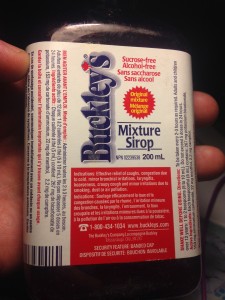 Buckley’s Sirop is a cough medicine made in Canada and it is the worst-tasting commercial product ever invented. The simple threat of its use as a remedy is enough to keep people from getting sick. If you ever worked at a state-run nursing home and found that all the urine-soaked rubber mattresses hadn’t been recycled by the housekeeping department but had in fact been stored in a humid shed until their pressings had been used to make wine, that indignant shock as a taxpayer combined with the mattress-wine would approach what Buckley’s Sirop tastes like.

I had my Canadian friend smuggle some in. We have all tried it during our colds — the children, too — and resolved to live better lives. The active ingredient of Buckley’s Sirop is that you would sooner drop dead than get another cold and have to ingest another spoonful of Buckley’s Sirop.

To my children I said, “A Shamrock Shake is not as bad as Buckley’s Sirop, but it is, in its way, close.” This intrigued them.

I ordered three large Shamrock Shakes and I was disappointed to see that their chalky green menace was contained within McCafe cups. I thought I remembered McDonald’s going all out before, with leprechauns and quotes from “Finnegan’s Wake,” but no more. I also didn’t like that three Shamrock Shakes cost me $11; our imminent diarrhea should have been less expensive. I think I read somewhere that Shamrock Shakes were discontinued for awhile after McDonald’s went through that transparency phase and changed their name to Imminent Diarrhea.

We didn’t stop to ponder our purchase but simply pulled onto Victory Blvd. and headed home.

I listened as the children pulled at their straws in silence for a few minutes, then I asked what they thought of this product of their heritage.

“It’s gross,” my daughter said, continuing to drink it. “I can see why you don’t like it.”

“Yes,” I said, “and I’ll drink that shake with my artificial heart.”

What occurred to me as I got home and threw the thoughtlessly-co-opted McCafe cup into the Recycle bin was that, of every childhood place I’d revisited, from the halls of my high school (smaller than I’d remembered), to the corner of my street (it seems like a country road compared to where I live now, but it didn’t then), to Radiohead (we all seemed to labor under the same delusion in the mid-1990s until they started murdering those people), everything was noticeably different so many decades later. Moxie is different. Chelmsford Ginger Ale is different. Dunkin Donuts are different. But not the Shamrock Shake. It’s just as awful but in a reassuringly similar way.

If I ever buy a seagoing vessel I am going to bolt a Shamrock Shake at the ship’s heart; there are so few things we can depend on.

“You can always depend on two things,” I told my children. “Your Father’s Love and that Shamrock Shakes will always taste like shit.”

(And for the fear of Buckley’s Sirop, the diarrhea was not imminent this weekend.)