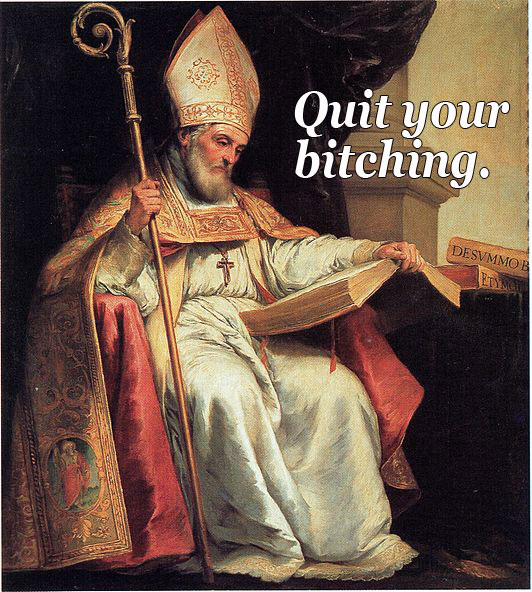 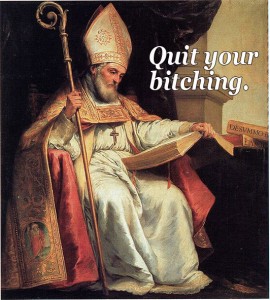 Does the fact that a bunch of people died, that the 2016 campaign was particularly awful and hopeless, and that nearly half of those who were eligible actually voted make you despair? Well stop. That’s what they want. Don’t go over the Rainbow Bridge just yet.

Let’s say it’s January 4. Or maybe David Bowie’s anniversary on the tenth. Or perhaps it happens on a private plane out of Vegas on New Year’s Day. No matter when the first celebrity death of 2017 occurs, don’t let it sink your year. Remember the words of saint and philosopher Isidorus of Seville, both in his “De Summo Bono” of 1493 and repeated on many a “New Year’s Rockin’ Eve” since then: “To commit a crime is death to the soul; but to despair is to descend into hell.” He echoed St. Thomas Aquinas who, eight years before in his “Summa Theologiae,” wrote that despair is the source of all sins.

Despite so many things going my way in 2016—my kids are the best, my dog is the best, I don’t consider my typos when I text someone as counting against my lifetinme stats, I’m in a good, solid relationship for the first time this century—I, like many people, felt gut-punched by the presidential campaign and election. Gut-punched into inaction and disbelief. And I’m pretty sure I would have felt similarly—though less acutely—had my candidate made it into office. People on all sides behaved so poorly, so in opposition to how, I’m hoping, they’d tell their children to behave, so lunkheadedly willing to double down on manifest foolishness, that more than once I heard myself saying, “there’s no getting through to these people.” That’s despair.

If that happens enough, you give up. You cede territory that you think is poisoned forever anyway. And then, when famous faces start dropping like flies, you notice that people are already attributing to the year some kind of power, as if 2016 weren’t some arbitrary construct thought up by greeting card companies but as Death itself. It happened as early as January of last year. People threw their hands up and lost perspective. Had David Bowie not died, the death of Glenn Frey the next week would have been much bigger news. In terms of story choices, Frey’s work on “Miami Vice” was shelved in favor of another article about Tin Machine. Paul Kantner’s death was overshadowed by Alan Rickman’s. It should have been a month of black armbands for Angus Scrimm. And people were already saying #Fuck2016 by Valentine’s Day.

By the time Prince died, in April, despair kept people from properly mourning Ken Howard, the White Shadow, who’d passed a few days before, nothing but net. It seemed the year had gotten away from us. We spent more time wondering who would go next than whether Doris Roberts’s family was OK. In any other year, wouldn’t it have been bigger news that Rob Ford had died?

It almost seemed like an assault, this parade of deaths. Is it too much of a stretch, then, to see voter apathy in the same light? Does the fact that 45 percent of eligible voters did not show up in 2016 point to a growing sense that there is no point? Would the evidence of Russian hacking and influence-peddling be a bigger deal in a year when people didn’t already seem so beaten down?

I ask these questions because I’ve felt it this year. I’ve felt the burden of distinguishing between news:fact and news:wishful thinking. I always put up a Christmas tree, even when I travel over the holidays, and in 2016 I didn’t. I thought, toward the end of December, that making a resolution was useless. “I’ll just lose the general election anyway,” I said.

But that, I think, is the start of a long goodbye.

It’s such an arbitrary thing, a “New Year,” but it’s a good time to remember that despair is, in fact, a descent into hell, however you imagine hell to be (mine involves airport restaurant tap water). Despair leads either to giving up or activities that will hasten the end, e.g. last November’s election. That’s why I’m making a few resolutions after all. I might not achieve them, but I’m not going to not try.

And when, in a few days, one of my beloved 80’s stars, UN Secretaries-General, romance novelists, or MMA fighters kicks it, I’m going to remember to be heartbroken and enraged, because if I acted like 2017 was on an inevitable spiral down the tubes, Isidorus of Seville would tell me to cut it out.