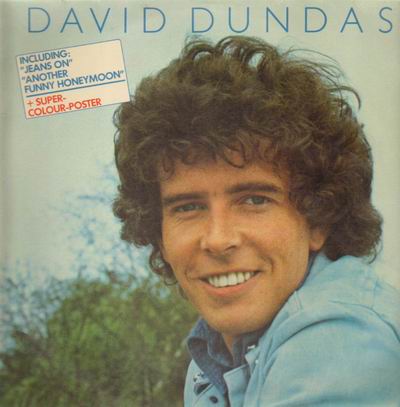 Jeans, motorbikes, and your pretty face. We have everything we need.

Of course I can think of plenty of upbeat, go-get-’em songs to start the year, but how about something that used to be a hit (#1 in Germany in December 1976!) that is now obscure? How about a song that grew from a commercial jingle for Brutus Jeans that was so popular it got expanded into a pop single? How about a ditty co-written and performed by a member of the British peerage that sounds like a Southern California beach anthem?

“Jeans On” (1976) by Lord David Dundas, son of Lawrence Dundas, Third Marquess of Zetland (who was himself a noted lawn tennis player) is, therefore, the only song that qualifies. How transgressive that a British Lordling, educated at fine schools, should say “You and me will go motorbike riding” rather than “You and I“? Move over, Sex Pistols.

Listen to “Jeans On” by David Dundas

Plus, “New Year’s Day” by U2 is too on the nose and I suspect that people don’t actually like that song but feel they should, making that the single song equivalent of everything Radiohead ever did.

London’s Brutus company manufactured jeans and the Trimfit shirt, popular across a wide swath of British youth culture, including suedeheads, Mods, and later skinheads. This 1976 ad is very forward-thinking:

The campaign was so compelling, and the song so catchy, that Dundas and Greenaway expanded the song, adding a bridge that extolled perseverance through inclement weather via motorbikes, and changed “Brutus Jeans” to “old blue jeans,” both of which made the song that much more accessible to people not educated at Harrow and too chubby to fit into skinny Mod jeans.

“Jeans On” was Dundas’ only significant hit, but he went on to score more commercials as well as TV and film, most notably “Withnail And I” and “Dark City.” Because of the song’s extensive sampling in Fatboy Slim’s “Sho Nuff,” Lord Dundas has yet another revenue stream.

There’s something about “Jeans On,” too, that sounds a little bit wistful. The keyboard riff reminds me of the opening of Dusty Springfield’s exquisite “Son of A Preacher Man” (1968), and the upbeat summertime feel is a perfect companion to Jay Ferguson’s 1978 “Thunder Island,” both of which hint at loss and regret.

It’s a great way to start the year with your feet on the ground.

It’s the weekend, and I know that you’re free
So pull on your jeans and come on out with me
I need to have you near me
I need to feel you close to me
Cha cha!

You and me, we’ll go motorbike riding
In the sun and the wind and the rain
I got money in my pocket
Got a tiger in my tank
And I’m king of the road again

I’ll meet you in the usual place
I don’t need a thing (except your pretty face)
I need to have you near me
I need to feel you close to me
Cha cha!

You and me, we’ll go motorbike riding
In the sun and the wind and the rain
I got money in my pocket
A tiger in my tank
And I’m king of the road again