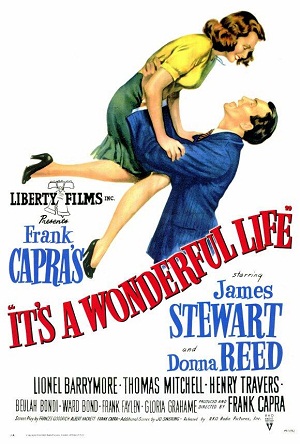 “It’s A Wonderful Life,” by virtue of being a delightful classic of Christmastime Americana, having spent a goodly chunk of time in the public domain (1974 through 1990, which is why people of a certain age remember it being on all the time from Thanksgiving through Christmas), and being the best example until “The Big Lebowski” of how the disabled can be just as rotten as anyone else, still carries its share of head scratchers, even independent of its insistence on the existence of angels, which at least has been corroborated by Parade magazine.

Here are a few:

Not only does druggist Mr. Gower smack George bloody for being an hour late with the capsules, but he smacks him on his sore ear. Granted Mr. Gower’s son died (Gower has left the telegram out for everyone to read) and he has been drinking all day, but it’s still inexcusable by today’s standards.

That Gower is tearfully penitent afterward only suggests a long pattern of abuse and depression. He’ll hit George again, and apparently the whole town is OK with it.

The telegram reads that Gower’s son, Robert, died of influenza. The so-called Spanish flu killed up to five percent of the world’s population between 1918 and 1920. If “It’s A Wonderful Life” were made today, Robert would have died from taking a selfie on an unstable bridge.

Violet Bick And the Sharpies

“We’ll wait for you, baby,” says one of two men Violet Bick is stringing along when George Bailey walks by (“I think I got a date!” she says).

Now that’s some bad behavior right there. It’s like texting at the dinner table. Not only should Violet not have treated her suitors that way, but the man with the thin moustache should have never offered to wait. Especially with another dude. Creepy third wheel. That guy deserves every bit of sadness he has coming to him.

After George succeeds his late father at the Building And Loan, he apparently moves the headstones of the cemetery to erect Bailey Park, containing “some of the nicest houses you ever saw.” Mr. Potter’s rent collector comes by to tell his boss about the development, sticking the knife in about “local yokels making with the David And Goliath wisecracks” and threatening to ask George Bailey for a job one day.

He says this with such derision that we wonder why Potter doesn’t fire him on the spot. Who talks to his boss that way?

To be fair, the actor Charles Lane is listed in the Internet Movie Database as “Real Estate Salesman,” which would suggest both a less subservient position to Potter and also the man’s frustration with Potter’s slum conditions. But in the movie he self-identifies as “your little rent collector,” and should therefore show some respect.

Later, when Potter offers George a job, he tsks that George has heretofore been playing “nursemaid to a lot of garlic eaters.”

George doesn’t correct him, because Hey, everyone knows Italians eat a lot of garlic. If you could get past the goat smell, Martini would reek of it.

After George bawls out his wife—Zuzu’s teacher—on the phone for sending Zuzu home “half-naked,” what does Mr. Welch do? He goes to Martini’s Bar to drink.

Then, serendipitously hearing George’s name, he gives George a sock in the jaw for making his wife cry. Typical alcoholic behavior. Why aren’t you home comforting your crying wife, Mr. Welch? Easy! Because it’s easier to feign indignation than do something useful, you drunk bastard.

George knows he will surely die if he jumps into the icy water from Bedford Falls’ famous Suicide Bridge. He thinks long and hard about it. Yet he jumps right in to save Clarence.

You may argue that it was Clarence’s Divine Grace that saved George, but I think cunning George calculated that his life insurance policy would be voided if he committed suicide, so he resolved to die by pretending to rescue Clarence.

Pottersville Looks Awesome And Is A Paragon of Post-racial Grooviness

The area’s African-American population increases by one when George isn’t around. Coincidence? In addition to Annie the maid and the porter over at the train station, the piano player at Nick’s in Pottersville is black, and he turns what was, under the Martini administration, a somnolent place where people like George and Welch drank alone in sadness, then got in fights, into a rip-roaring joint where men and women dress up, laugh, and dance together, where the bouncers wear nice suits, and where wings are given out every few seconds.

It is an uncomfortable truth that the old hometown has actually improved without the corrupting presence of the Bailey boys. But let’s not rule out another character missing from Pottersville: The problematic Giuseppi Martini.

Mr. Martini Is Some Kind of Ghoul

In the nightmare world of Pottersville, Frank Capra would have you believe, each of Bedford Falls’ wholesome citizens has somehow gone to seed or the grave without George Bailey around. There’s Violet Bick, whose perversions and unreasoning hatred of all mankind rival those of the woman, Ursa; there’s Mr. Gower, now a soused ex-con child-slaughterer pharma bro; Ma (of whom?) Bailey runs a cold and loveless boarding house; Bert is a maniac cop answerable to no man, hell-bent on street justice; Ernie the cab driver practices unlicensed psychiatry by diagnosing passersby as “bats,” and Mary Hatch has a civil service job promoting literacy. Horrible.

But Mr. Martini is nowhere to be found in Pottersville. Why? Because if George Bailey was the only stopgap to the manifestation of the latent antisocial tendencies of his friend circle, then Martini, a sepulchral and cadaverous being even in his Bedford Falls incarnation, must in Pottersville be some kind of shrieking demon, gobbling souls from here to Elmira.

When George doesn’t exist, it stops snowing. Was it due to the lack of unevaporated tears? Earlier he proved that he could lasso the moon, so anything is possible.

Mary Didn’t Have To Be A Spinster Librarian

Mary, who worked vacations in New York during college and who had a relationship with Sam Wainwright, didn’t have to become Pottersville’s resident old maid librarian. Without George—as the latter said so himself—Mary could have married Sam, or anyone in town.

But kudos to Mr. Potter for supporting public libraries.

Bert the Cop, Sworn Peace Officer of Pottersville, fires on a fleeing George. Upon encountering each other again on the Suicide Bridge, George tells Bert to back off or he’ll punch him again. Clearly George isn’t thinking straight if he thinks a punch will deter someone unafraid to discharges a firearm six times on a crowded street.

Mere moments after spotting a newly-extant George on the suicide bridge, Bert the cop manages to drive Harry Bailey home in a blizzard from the airport and learn how to play the accordion, a talent that would have come in handy when he and Ernie were serenading newlyweds George and Mary a decade before.

There Should Be a Grammar Requirement for Angels

Why an emdash after a colon? And it should be Love COMMA Clarence.

A Marriage Full of Secrets

After buying the old Granville Place without George knowing and keeping her first pregnancy secret, it serves Mary right that “Tom Sawyer” shows up on the swag pile.

“It’s A Christmas present from a very dear friend of mine,” says George.

“What are you not telling me?” thinks Mary, her life crashing in around her. “It’s a small town that you have never left. I know all your friends. I tolerate whatever unfulfilled longing you have for Violet Bick, your solitary drinking, and the fact that you have never fixed that knob at the end of the stairway. God Damn You, George. Who the fuck is Clarence?”

Around the tree, Zuzu points out that “Teacher says: Every time a bell rings, an angel gets his wings.” George agrees, forgetting it was this very teacher that tried to freeze his daughter to death a few hours before, and who apparently has approval from the Bedford Falls Unified School District to teach units on Angel Theory.

No one has stopped to think that any of this bad luck may have come about because the Building And Loan moved a cemetery and built houses on it?

2 thoughts on “It’s A Flawed Life, When You Really Think About It”

May 18, 2018
Oz Never Did Give Nothing to Moulty: A Bucketa Massachusetts Accents 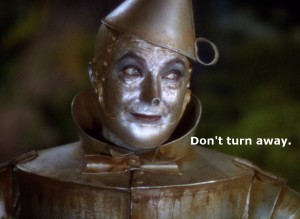 Oz Never Did Give Nothing to Moulty: A Bucketa Massachusetts Accents