Today we enter the cylinder

I think you’ll agree that whoever posed for these laundromat warnings either had a wealth of experiences to draw from or had a rich inner life. Maybe both! 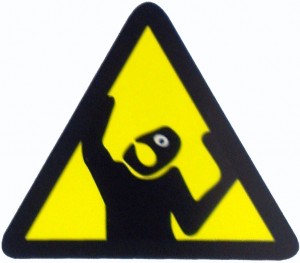 There’s a possibility that the model for the first picture, with the perfectly round head, jagged amputation wound where his right arm was, and no neck or eyes, is different from the person trapped in the washing machine below, whose eyes only serve the purpose of seeing how desperate his situation has become.

If they are different, the armless guy probably thinks he got off easy.

Because the guy in the cylinder has no hands to manipulate whatever failsafe controls there are on the inside of the washing machine to get himself out. It’s like a horrible dream this guy is living in that free-floating head of his.

We can all be forgiven for taking this second image as a metaphor. Why?

Because the top image, while graphic and brutal and every bit an accurate portrayal of the sort of thing that happens in American laundromats every day and why they’re not shut down or investigated I don’t know, considering the carnage that goes on, what with doors that appear to have sharp, toothlike, tearing metal edges, is clearly from the real world; something frightening and dangerous but avoidable.

Like the character in Edvard Munch’s “The Scream,” who just seems to lose it on a bridge, the person in the first warning lives here in our world, with us.

The second character inhabits a theoretical realm that is far more terrifying. While the warning says “Don’t enter the cylinder,” this wretched soul appears to be trapped in a triangle, like General Zod. A triangle is not a cylinder. This grown man is trapped, therefore, in an abstraction, perhaps of his own making. Impotently he flaps his double-jointed wrists against this equiangular construction of his tortured psyche.

Man 1 has been defeated by the world. But he has a chance to come back. Maybe he’ll hire someone to do his laundry for him. Man 2 isn’t even in a laundry. He doesn’t even understand shapes. What hope is there for him?

You have never seen a washing machine with a triangular window, so you know my interpretation of this is correct.