Nice Things Are Not To Be Used

This is a story about scalable technology. 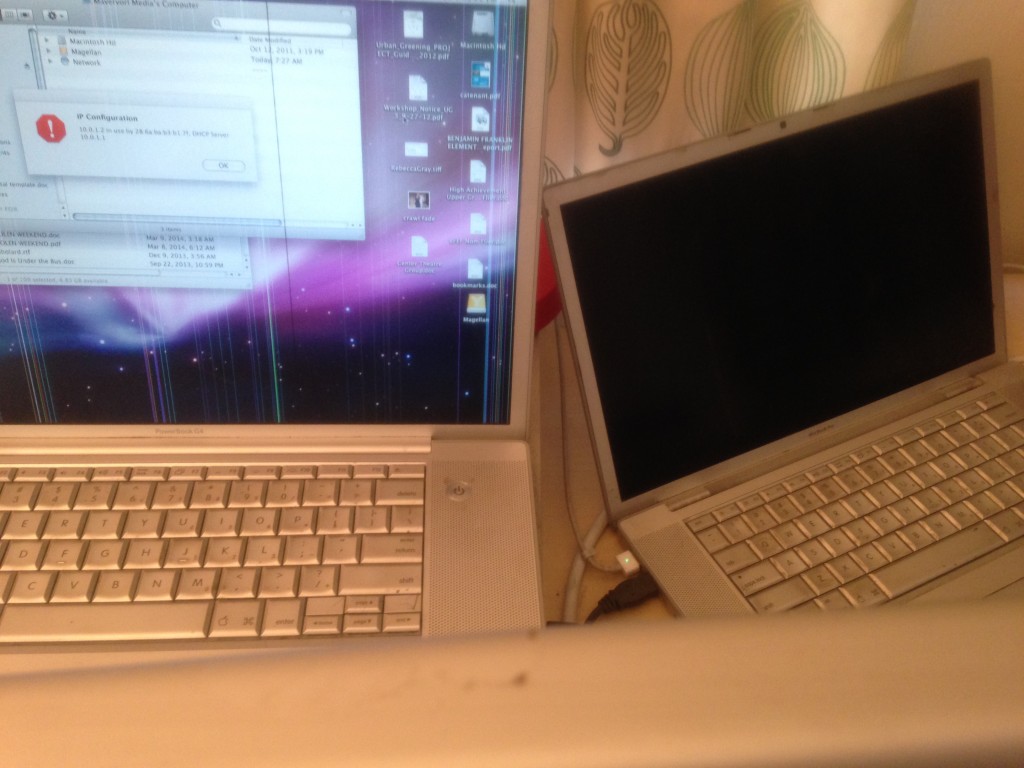 If you’re not familiar with the term, something that is scalable is able to easily be taken from or added to, depending on the circumstances. I might buy a computer that, should I need it, has extra room for more hard drives and memory. Or I may buy belts with extra notches that will accommodate my wasting away to nothing.

Late in the last century (the American century) I was working in a large IT department at Harvard Business School. I wore a tie every day and carried a briefcase full of tiny screwdrivers and RJ-45 cables. Later I got a promotion, moving across the river to Harvard’s Peabody Museum of Archaeology And Ethnography, where I went tieless and was a much bigger cog in a smaller department. It was much more casual as the air was filled with corpse dust.

On my first day I sat at an ancient professor’s desk (“ancient” modifies both the professor and his desk) to surgically remove several floppy disks he had shoved nonconsensually into a Mac Classic II. As I cleared some room for the extraction I had to move a small wooden tray full of human skulls. The professor was studying fracture patterns to determine the size of the tools used to stave in those primitive heads.

One of my jobs was to export information from a 3-year-old database into a new, expensive, proprietary museum database. Unfortunately the old database was so out of date that its structure was unreadable by its replacement, so I had to load four different computers with incremental updates, exporting from one computer and importing into another, until the rode-hard-put-away-wet data was finally ready to be integrated into the new machine.

Over lunch with the professor (I fear his is one of those skulls now), he told me that there were steles — inscribed stone slabs — in the museum’s mysterious back rooms that were 5,000 years old and that he and his colleagues could read No Problem. Meanwhile I was slowly sterilizing myself in a room full of computers trying to upconvert three megabytes of tab-delimited nonsense into FileMaker 3.

“Thanks a lot, Professor,” I said. “And good luck with the Mummy’s Curse, you old graverobber.”

Time passes and it is now April of 2016 and I, like that old professor, am in possession of ancient technology. This time it’s a 2007 MacBook Pro that I bought when it was cutting edge. In the last nine years it’s no longer able to keep a battery charge, its screen is dark so I’ve got it hooked up to an external monitor, its magnetic power cord contact is so iffy that I can’t move it, and each day it takes longer and longer to boot up. I know I should put it out of its misery but I just don’t want to let it go…it’s where I learned HTML5 and the key combination for the emdash.

I’ve got a cheapo HP laptop for traveling as well as a bunch of iPads and iPhones and cloud storage devices and Dropboxes, but I still like hooking up a raised-key keyboard to the MacBook and typing. It’s where I’m finishing my book, in fact. It’s where I work on scripts and limericks and ransom notes and just about anything text-based that doesn’t require video or patience.

Until last week, that is, when I thought it might be fun to upgrade to OSX El Capitan.

I’ve had OS upgrades nuke computers before and I know to back things up, but something particularly pernicious about this upgrade was that it wiped away part of a backup containing about 40 pages of something I was working on.

If I was to get the past 40 pages back I’d need to boot in Safe Mode and re-enable USB so I could get a flash drive in there (by “in there” I mean my mouth, as the stress had caused me to regress to infancy). But I couldn’t because the external monitor was also disabled so I couldn’t see anything.

Then I remembered my old 17″ PowerBook from 2004. It has saved my bacon in at least one other similar situation and I have refused to throw it away. I pulled it from the shelf of the kids’ closet and fired it up (its screen is shot, too, but viewable), remembered a few passwords that I haven’t used in several years (I probably should use auto-generated passwords but I don’t; which makes remembering them like a lazy backwards journey of personal discovery), determined it couldn’t take Dropbox, hooked a firewire cable to it and the 2007 MacBook, started the latter in Target Disk mode, dragged those 40 pages from one computer to another, sent them to the network backup server, logged into it from my PC laptop, and am now reformatting several hundred pages, which is going to take a long time.

But at least they’re not gone. The Very Old Mac holds up the Old Mac like two senior dogs about to drop dead. I feed from the pathetic zombie computer like it’s organ harvest time in “The Matrix.”

There are five different personal computing machines humming on this dining room table as I write this, alone. Occasionally the dog gets caught in a tangle of temporary wires while I transfer to various devices 21 years, really, of old and new data created on Performa 638s, PowerMac 6100s, a handful of Dells, G3, G4, and G5 towers, clamshell iBooks, first-through-whatever generation iPods, iPads, a Blackberry, a Zip drive, an HTC-One, various cameras, and a drawer of jumpdrives so filthy and caked that I shudder to think what passed through them.

I think of that professor (whose name I forget but whose email and VCard data are probably in the guts of a beige G3 at the bottom of a landfill somewhere for the next 57,000 years) and his friends who could read steles, and I think: Maybe I should start writing on rocks.