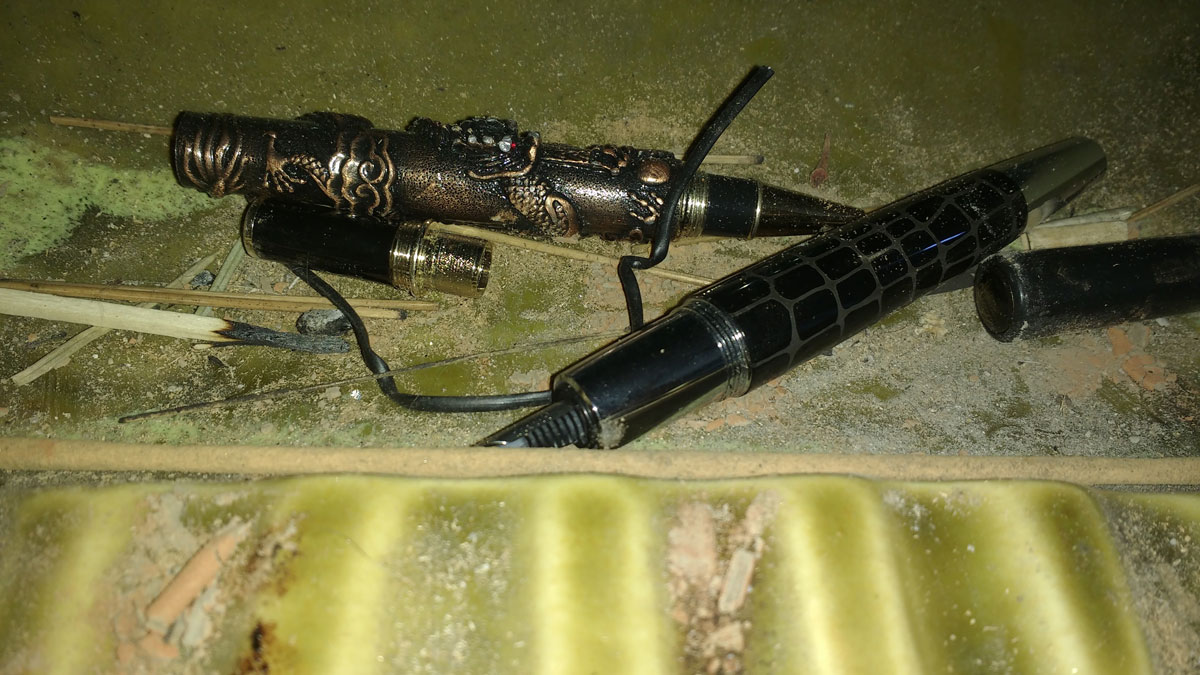 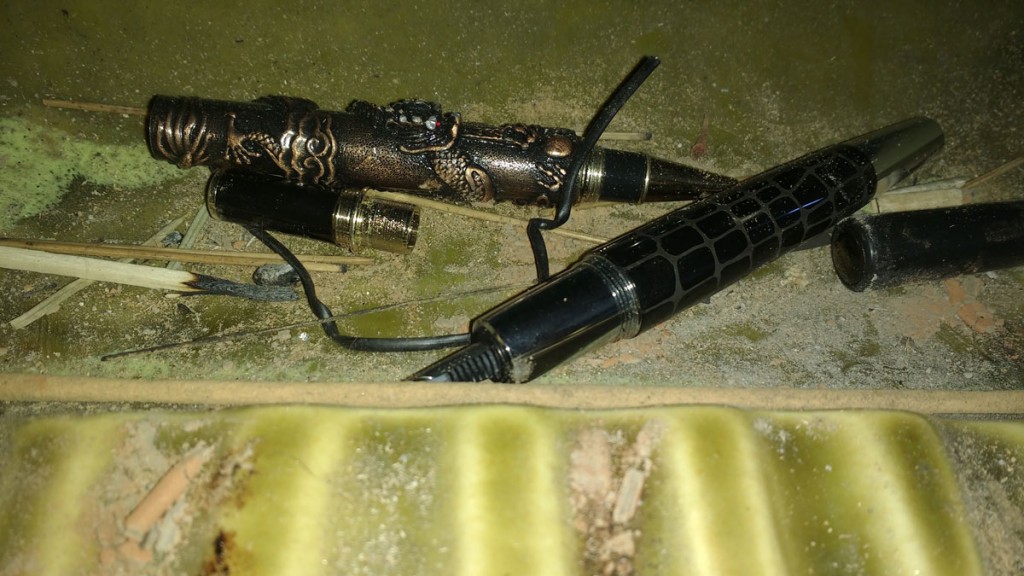 Like they’ve been bombed and decommissioned and are sinking to the bottom of the ocean, these heavy instruments in this maybe-jade but probably-worthless ashtray my ex father in-law left behind are the remnants of three beautiful pens. Each of them was acquired, loved, and rendered useless within a short time—less than six months—and each has such a nice little story behind it. I can’t help but think, because maybe I’m a certain kind of precious asshole, that this trio of pens and their early retirement say something about the feasibility of my writing career. Best not dwell on that. But I do think the stories are good.

The pens were mostly practical but also an attempt at having something permanent and nice. I have long, skeletal fingers and, when I’m concentrating on something, I can sometimes absentmindedly snap in half whatever I’m holding. I’ve destroyed pencils this way, scalded myself with the contents of styrofoam cups, and I won’t say the third thing. Not because it’s so terrible, but because there isn’t one. It’s just been a bunch of pencils and cheap pens, and a lot of McDonaldland coffee. I wish there’d been a third thing I’d absentmindedly broken, like a Grammy or a prom date, “Of Mice And Men”-style, but the first two are more than enough to convince a professional that I have a problem.

So I wanted a good, heavy pen that I wouldn’t snap and which looked cool and would last.

I found the first one on Amazon for something like ten bucks. It was made in China and was heavily ornamented. It looked like the writing implement version of an Ed Hardy shirt. I loved it as soon as it arrived. I thought it was a Chinese caduceous, with two cheap red stones for the eyes of the snake. It was ridiculous but it wrote well and it felt solid.

I was still pretty excited about it when I brought it to a meeting. I took it out of my pocket and said, “Hey, I got a cool new pen!”

My friend Carla was similarly excited and, in a show of sympathetic exuberance, grabbed for it but instead knocked it out of my hand. It landed on the floor, unsprung. Throughout the meeting I tried to put it back together but couldn’t. Carla noticed this and was concerned. I didn’t want this incident to have a chiling effect on any future shows of enthusiasm, however, so I downplayed my grief.

But I liked the pen, and I was meaning to replace it about a week later, when there was a knock on my door. It was Carla. She had used her craftiness and photographic memory to find me an exact copy. She had observed—as I hadn’t—that the animal on the pen was a dragon, not a snake. I pulled the new pen from its packaging and thought that this must surely be a sign. I was glad that my children had witnessed this simple but thoughtful gesture of adult grace.

The next day I was picking up my kids from school when I bumped into my friend Ellia, who is also a writer. I knew she’d like to see the pen but I made sure not to whip it out so cavalierly.

“I did not know that,” I said, having been steeped in an Icelandic, Tolkienesque concept of dragons-as-jerks rather than a Chinese one.

“You should name your pen,” Ellia said. “It will be good luck.”

I thought about it for a while and decided on Lucy. I had Lucy for about a week more.

My daughter and I went to the International House of Pancakes one morning and she requested to borrow Lucy so we could play Hangman across several napkins. When our breakfast came we abandoned the game and later left the pen at the restaurant.

“I can’t have nice things,” I thought. I was pretty sure someone would find my lucky dragon pen and take it home.

Nevertheless I called the restaurant and the manager said someone had found the pen and that she would keep it for me. I drove back there the next day, ten miles through traffic each way, and announced myself at the IHOP. The person at the cash register handed me the pen in several pieces. Whoever had turned it in had unscrewed it from the wrong end—effectively breaking it—and had taken the ink. What I got was the barrel, the cap, and a piece that couldn’t be glued back on.

“I was like, ‘I don’t know why he’s coming back for this,'” the cash register person said.

“Really? Were you like that?” I didn’t say. I had planned to stay and eat breakfast but I decided against it. This was payback, I thought.

When I was 15 I worked at McDonald’s. One day I was cleaning up booths and mopping floors. A father and his daughter came in just as I finished with the booth they had their eye on. As I walked away the dad apparently found something I’d neglected to wipe, or that I’d forgotten to remove.

“No wonder they need help,” he said to his daughter, in a way that made me wish she’d grow up to be a very difficult teenager for him.

Wouldn’t it be weird if, 30 years before and on another coast, he’d found my pen, disappeared through a temporal vortex? Unlikely, but stranger things have happened.

Driving away from the IHOP, I also decided against buying a third Chinese pen. They weren’t good luck, whether you named them or not. Plus, they didn’t have one quality I particularly like in pens: the ability to be stood up on a flat desk or table. The two dragon pens were rounded at either end. If you tried to stand them up, they’d fall over.

But I did have a heavy, elegant fountain pen that could be stood up. I was hesitant to use it, however.

It had been a gift from someone I’d broken up with a few months before. The way it got to me was innocuous enough but it became problematic and metaphorical once the relationship ended. Her ex-husband had given it to her but she didn’t like fountain pens, she said, so she never used it. She gave it to me as a Valentine’s Day present but it had no ink. Later I thought, “if you’re going to re-gift something, wrap that shit up and make sure the batteries are fresh, or there’s ink and whatnot.”

At this point I have several decades’ worth of former relationships and I have at least one prized possession from most of the women involved. Items of apparel, a table, a chair, books, children… I never got in the habit of throwing something away just because I was no longer on any terms with the person who gave it to me. If anything, I like to keep these old souvenirs around to remind me to remember things fondly, and I mostly can.

So in that spirit I went back to Amazon to order some ink for this fountain pen, and when it arrived I enjoyed the satisfying pop that I imagine phlebotomists feel when they break your skin with a needle. Fountain pen cartridges need to be twisted and pierced to make the ink flow, and the process of writing becomes like a controlled internal hemorrhage. As with the others, writing with this pen was a pleasure.

The next day the kids and I were driving somewhere and I got rearended on Los Feliz Blvd. It was a gentle tap and no one was injured, and the other driver was very apologetic. We exchanged insurance information on the trunk of my car, and the other guy complimented me on the pen. I didn’t tell him the story because he was shaken up enough. He was also about 25 and I didn’t want to scandalize him with stories of ex-wives and re-gifting.

We shook hands and drove away. Turns out my deductible is too high to cover the little dent, and also that I left the cap of the pen on the trunk when I left. Yes, I drove back to Los Feliz Blvd. and checked the gutter for the pen cap, but it was not meant to be.

These perfectly serviceable fine-point roller pens that I buy at Costco or the dollar store go missing all the time and I don’t fret about them. I don’t leave their ruins in commemorative, ornamental ashtrays. And I know that if I bought or was gifted at $300 Mont Blanc I would lose it or break it because it is a tiny sliver of metal and plastic that is about a hundred times more fragile than my car keys, and I lose those with about the same frequency.

I guess the lesson here is that, if I like something and want to keep it, I should never take it out of the house, or use it. This worked for my cat, who lived for 19 years.

2 thoughts on “Nice Things Are Not To Be Used”