The Bathroom At Connie’s Wedding 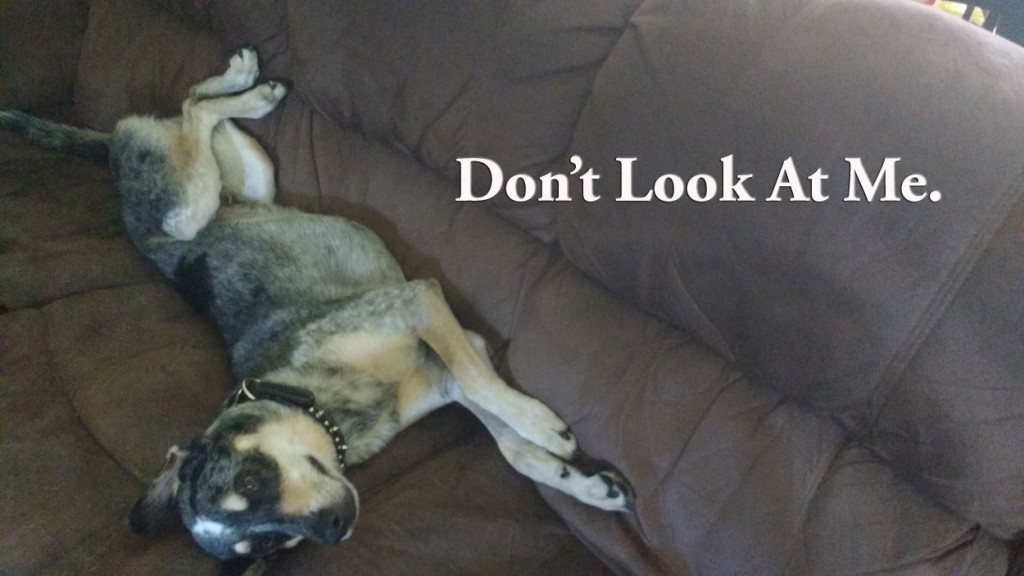 This story, about our dog, has a happy ending.

Over the course of 18 hours one day last month, our beloved dog became paralyzed. Gordon Thunderfoot, a high-jumping, 60-lb. Australian Shepherd/Greyhound who is not yet six, had spent a weekday morning fielding tennis balls around the back yard, jumping without use of stairs to the 5-foot platform of a kids’ play structure, and catching kicked soccer balls in mid-air. This was routine to him. The next morning, he couldn’t move.

I found him on my son’s bed. He was dead weight. He couldn’t wag his tail. He tried to get up but collapsed. I hefted him downstairs into the yard, placed him on the grass, and he crumpled there.

I had to gently toss him in the back seat of the car because the alternative would be to shove him. I drove him to the vet where, five years before as a 3-month-old, he’d been neutered and innoculated following his release from L.A.’s Lacy Street Shelter, a tough institution where he’d been mixed up in gangs. He hadn’t been to a vet since then but seemed to remember the place. He howled as I brought him in.

“They can’t take your testicles twice, Gordon,” I said.

Nevertheless, both of us were distraught. I placed him on a table and he panted in fear, a look that, to the uninitiated, seems like a smile. I watched as a vet tech carried him into a back room. This was the only other person to carry him in his life. My children, whom I’d seen through some surgeries in the past year, had been wheeled into the operating room fully informed and reassured. I couldn’t tell my dog anything. 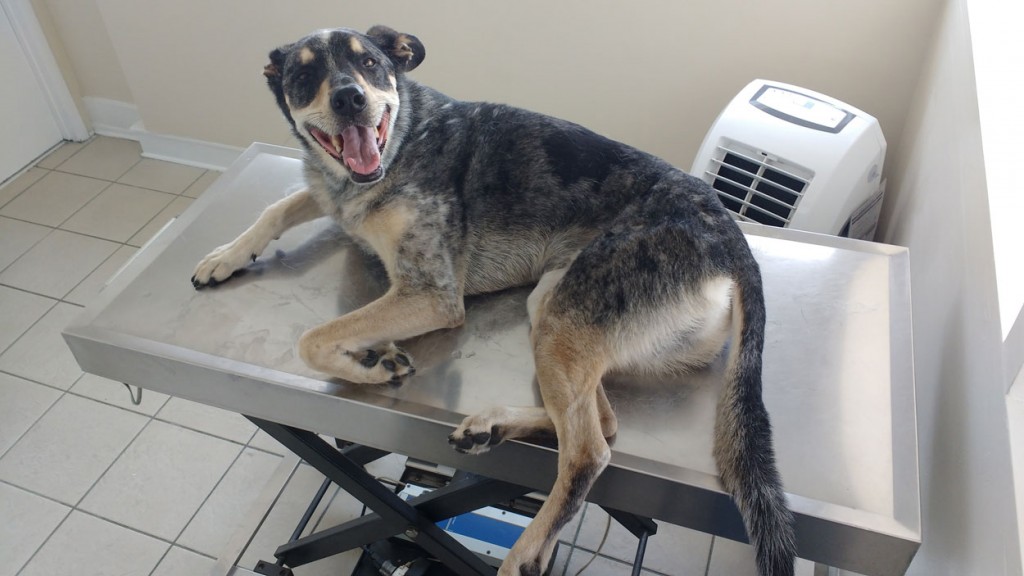 Gordon had suffered a fibrocartilaginous embolism (FCE), often known as a spinal cord stroke. He had likely not stuck the landing after a standard jump. Embolisms are like volcanic islands; they’re formed when there is a break in the surface. In Gordon’s case, he had fractured a vertebral disc, sending a sliver of it into a blood vessel of his spinal column, causing the embolism that had quickly shorted his neuro functioning. It was so severe that the vet asked if he had been hit by a car.

The vet, however, had only noticed the broken vertebra, and not the stroke. The internet diagnosed the stroke.

I don’t have pet insurance (Gordon is such a vital dog that it was reasonable to think that only a car could stop him) so the vet visit became very expensive, very fast. Because of this and because of Gordon’s obvious merits as a sentient being, I expected the veterinary staff to be solicitous, wish us luck, make follow-up calls, answer the phone, or return messages. This didn’t happen, but they at least offered to euthanize him as they handed Gordon back to me eight hours later, carrying him with a series of bath towels. As public a personality as Gordon is, I forgot that I live in a bubble and was surprised that people didn’t trip over themselves to treat him like royalty.

In addition to his FCE, Gordon had acute pancreatitis. The vet suggested it was stress-related as a result of the sudden loss of his limbs. I simply did not have the cash to take him somewhere for extra MRIs, boarding, and physical therapy, nor did the vet suggest that it would be successful, so I turned to the internet and found that either he would walk again or he wouldn’t. I learned that FCEs are common in dogs of Gordon’s size and that, for some reason, they rarely recur.

At the outset, Gordon’s prognosis was grim. At the same time, not a lot is known about FCEs. It’s generally agreed that the neurological trauma needs to be addressed quickly or the damage will be permanent. Then, to the extent that the dog is willing to fight and the owner is willing to be a home health aide, your pet either improves or falters. 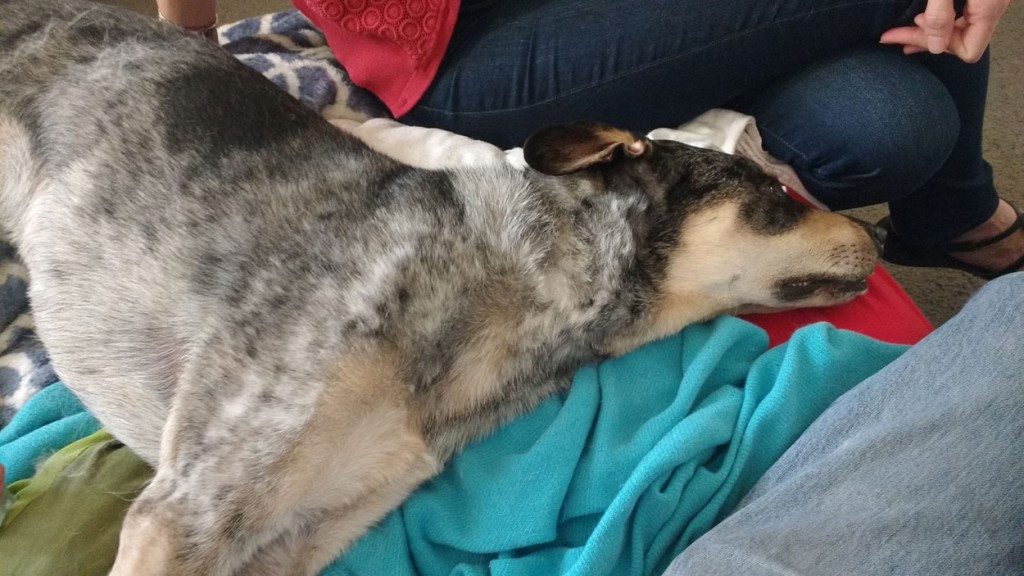 Gordon has unfinished work, so I had to cook his meals (mostly chicken and rice), hope he ate, massage his legs, carry him upstairs and downstairs, and hope he relearned how to go to the bathroom. This last part found me fighting with Gordon’s sense of dignity; at various points in his gradual recovery I believed that he would rather explode from a septic backlog of his own unexpressed poo than risk getting any on himself. This dog, who for more than five years had eaten three meals a day and had twice-daily dropped an efficient series of healthy, modeling clay-like logs, hadn’t crapped in three days.

Then I learned about ice cubes.

An ice cube, the internet (which, let’s face it, had also promised me Trump’s defeat, Bernie’s come-from-behind win, and how #7 would shock me) explained, when placed directly on a dog’s anus, would cause the sphincter to pucker out as if trying to push it away. This motion would make Gordon remember his glory days of shitting everywhere. 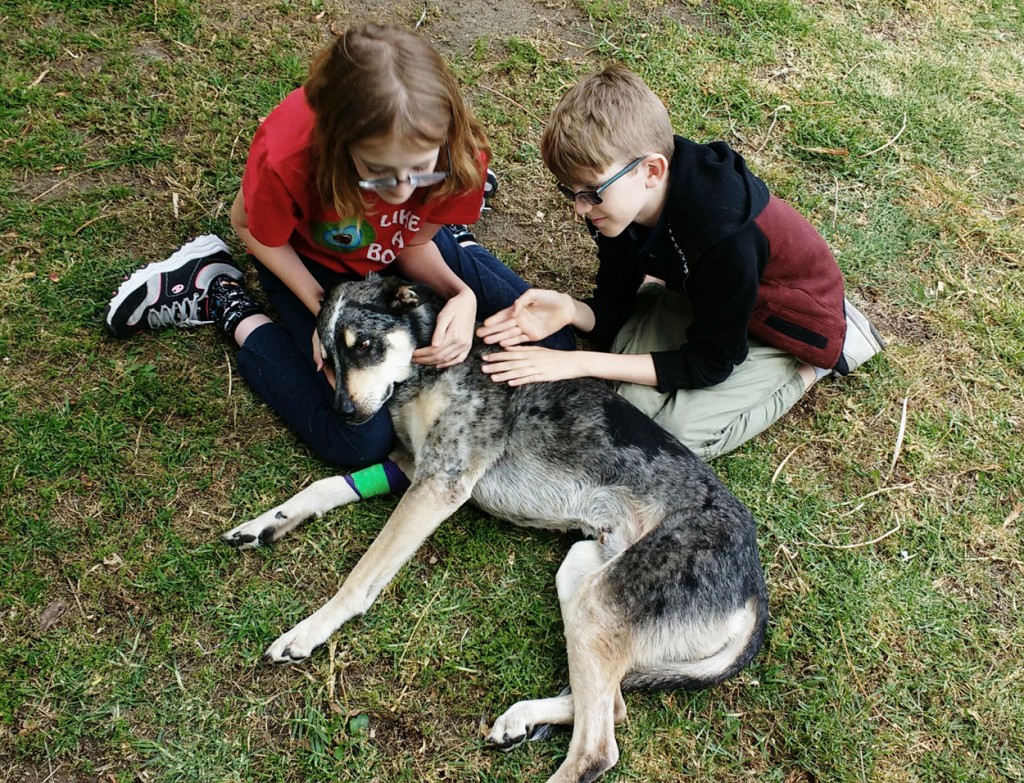 I lay him on the grass, like a 2-dimensional object, on the front lawn. The kids gently held him down. I had on black latex gloves and carried a glistening ice cube peaking out of a tightly-clutched paper towel. I regarded my dog’s butt for the first time. I hadn’t had occasion to really look at it before. It had gone its way and I had gone mine. But now, in a sweeping motion, I lifted his tail with my left hand and, with my right, brought the ice cube to his anus.

In English, Gordon said, “What, the fuck, are you doing.”

As Gordon’s sphincter forcibly relearned its role, neighbors stopped and gaped. Gordon gaped right back. Defeated, he then deposited a small pile of trapped logs on the grass and, with his front legs, suddenly made a swimming motion to get away from them.

Shame became the first step to his regaining his legs. I understand that the need to add “-shaming” to most nouns is a sign of our decline, but Gordon’s cube-to-the-anus shame resulted in his walking.

The ice cube trick only worked two more times, however. By the third time, Gordon would just shriek when the ice came near. I also saw this as an improvement. By this time his pancreatitis had abated and, due to the solid, blood-free, non-tarry condition of his logs, he could take steroids to reduce the inflammation of the embolism.

“Just don’t make me like Lyle Alzado,” he said.

I found myself talking about my dog’s excrement to strangers. I talked more about my dog’s poop than I did about my childrens’. Now that I think about it, I dreaded my childrens’ diaper-leavings and occasional diaper-adjacent deposits. Meanwhile when, six hours after eating a can of unsweetened pumpkin (another internet suggestion), Gordon dragged himself up to steady his frame against a tree and actually squatted for the first time in a week, I cheered.

The internet said that if I wanted to attempt Gordon’s recovery at home, then I should keep him crated and otherwise as still as possible. I have a Facebook friend, Melissa, who runs a busy dog-walking service. She loaned me a crate and I put Gordon in there for a while, but it soon became clear that whatever setbacks he had suffered were, in his opinion, temporary. He whined and howled inside the crate, tried to get out of it, and fought when he was put back in. He fought because his front legs were now working. 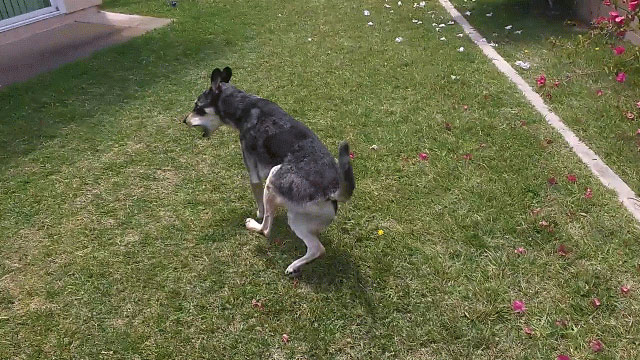 Two weeks later he could stand and walk on three legs. His back driver’s-side leg was still dragging and I removed his IV bandage from his front leg to find the needle adapter still attached. I left an angry message with the vet’s office but no one called back. Maybe I’ll get around to writing a Yelp review. A week after that he was moving on grass in a charming ataxial hop, collapsing every few steps but getting back up again. He would occasionally try to jump at a tennis ball, but we soon learned to throw them directly at his mouth. His running became a drunken fishtail all over the yard. He seemed to not care. When he’s outside, his tail just wags.

Today, less than a month after the vet suggested that, if I couldn’t swing the additional “up to 10K” that might be required for more tests, I might consider putting Gordon to sleep, he has returned to cleaning the kitchen floor of dropped broccoli and has resumed his hoovering the popcorn and whatever else we drop on ourselves and the couch. He climbs on beds and couches with effort, he has difficulty on stairs, and he walks like the Polar Express in that scene when the train is on the ice. But he improves daily. I still cook his meals but now augment them with a product called Just Food for Dogs, which is fairly inexpensive, very healthy, and prepared in Los Angeles.

That said, it is unlikely Gordon will jump again. Once, he could get seven feet up a tree in pursuit of a squirrel, and he would daily put on an acrobatic show in front of my kids’ school. He’s the type of dog that would intercept a frisbee whipped at a human being and take it full in the face four feet in the air, hit the ground, roll, and fight you if you tried to take it away from him. I think it’s unlikely that will happen again.

In the first few days I forced myself to consider putting Gordon to sleep. This dog who is famous in our neighborhood, at school, and on select social media venues. Our lives are better with Gordon, and we want him to live forever. If you’ve ever eaten dinner with us, Gordon’s voice joins every conversation. He is the reason my children are physically brave. They’re not scared of dogs and are kind to all animals. They walk the neighborhood with him and their skinny arms are strong from keeping him from bolting after cats, pigeons, squirrels, and skunks. He could rend us all asunder but he submits to wrestling us and trying to shove his Frito-smelling feet in our mouths. We’ll miss the days when he would jump to eye level to greet us, but we’ll take what we can get. 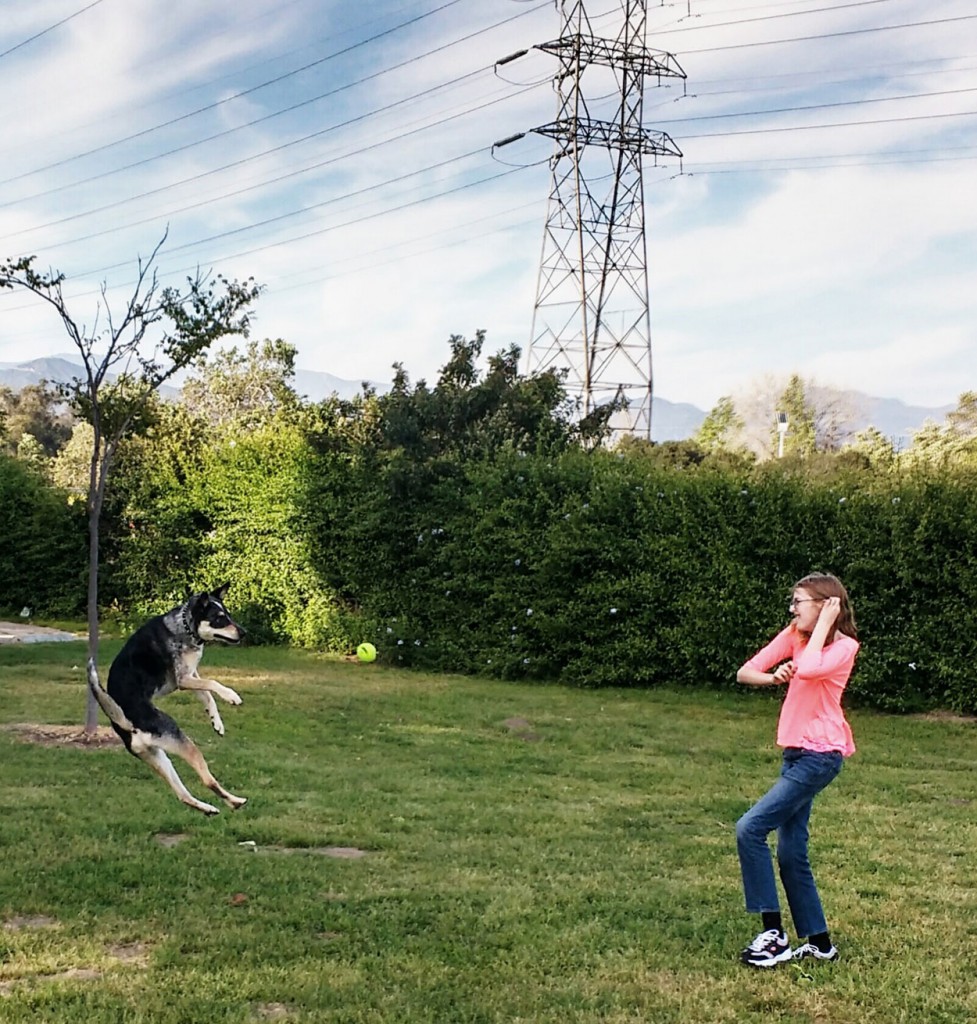 Still, a month ago we thought he wouldn’t walk again, so there you go. 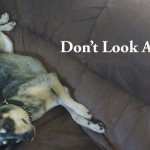 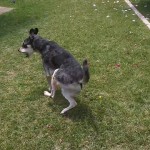 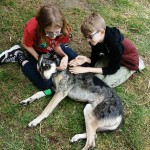 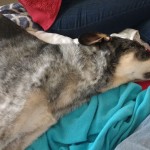 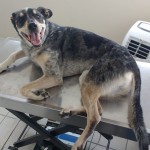 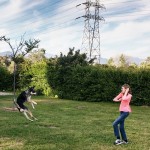 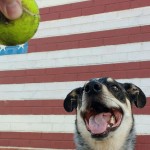