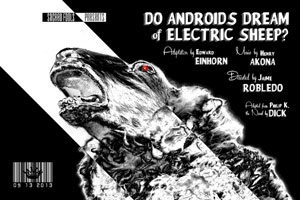 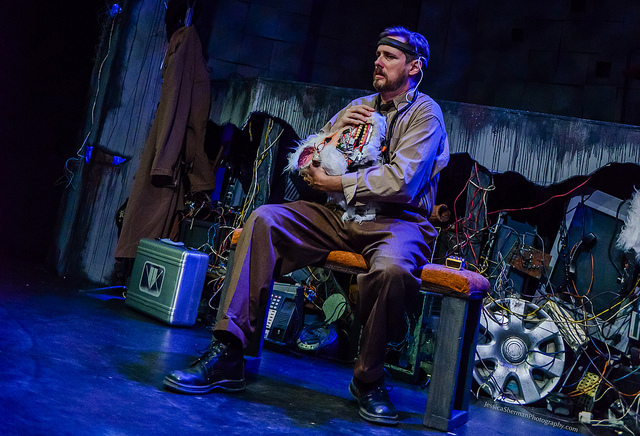 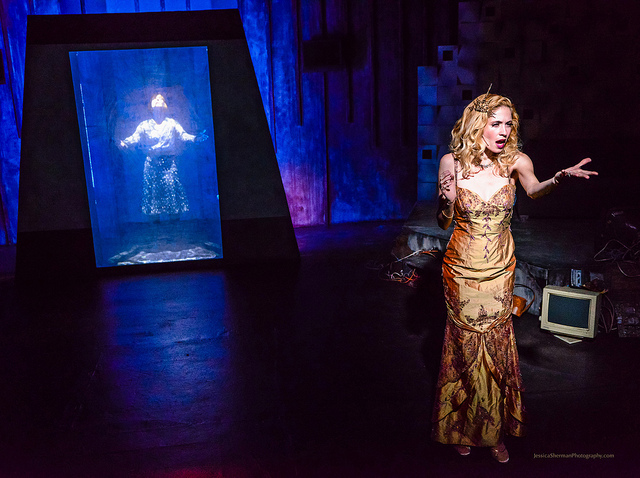 When we get past its dystopian, tech-heavy filter, science fiction becomes a mirror. It tells us a lot more about our own dystopian, tech-heavy present than it ever could about the future. In the west coast premiere of Edward Einhorn’s stage adaptation of Do Androids Dream of Electric Sheep?, bounty hunter Rick Deckard chases himself as hard as he does those canny Nexus-6s.

Deckard (Eric Curtis Johnson in a performance appropriately uninspired by Harrison Ford) tries to find meaning in his own life while “retiring” the lives of several androids. Yet the ‘droids (“skinjobs” and “replicants” in “Blade Runner,” “toasters” in the reboot of “Battlestar Galactica,” “machines” in “The Matrix”) possess less self-doubt than Deckard; it makes them less human but more alive.

Wife Iran (Lynn Odell) abuses her mood-altering organ, dialing it down to Depression to feel…anything. The couple is drifting apart — Rick can’t afford an electric goat, much less a new synthetic one, so he accepts work hunting down androids; Iran finds no empathy in her husband.

While comparisons with Ridley Scott’s “Blade Runner” are expected, that adaptation, too, said more about 1982, with Ridley Scott moving the action from San Francisco to Los Angeles and replicants looking like severe Duran Duran video minxes, not to mention Tangerine Dream. But Mr. Johnson (and director Jaime Robledo) give this Deckard a deeper world-weariness than Harrison Ford needed for his turn in the role; our Deckard is as filled with doubt as he is with rote answers to uncomfortable questions.

“Would you like to have sex with me?” the superb Kimberly Atkinson as a kind of android Katherine Hepburn asks him. 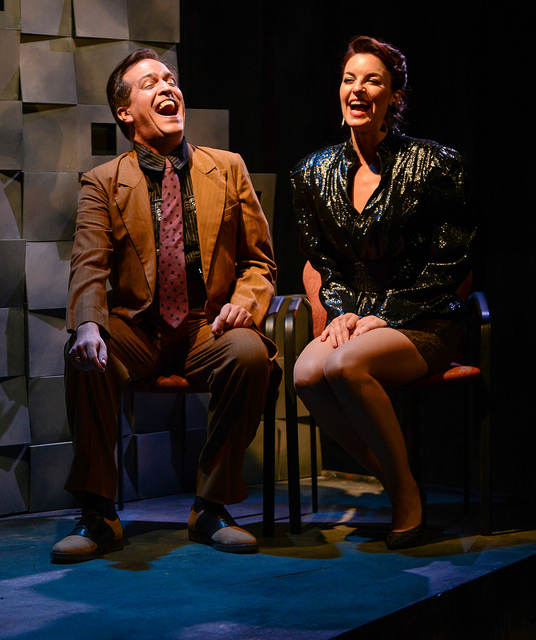 Post-show, unofficial dramaturge Richards reminds the audience in a Q&A session that Philip K. Dick wrote “Androids” over a 10-year-period while living in Southern California squalor.

“Buster Friendly was what TV looked like to him,” Richards says.

And in Corey Klemow, who plays radiation-addled “chicken-head” Isidore like a tragic post-apocalyptic Charlie Gordon, we find Dick’s on-stage stand-in.

Whereas “Blade Runner” — coming as it did at the dawn of mainstream A.I. dread that gave way to the Terminators — helped us sympathize with weeping, dove-cradling replicant Rutger Hauer, Einhorn’s “Androids” places our sympathy squarely on the humans; Klemow as Isidore is everyone’s sad-sack friend, Odell as Iran is the woman who finds grace through surrender (it doesn’t matter if her husband is an android — at least he’s her android), and Curtis’s Deckard, trying to define himself through his job, is the loneliest of all.

Explaining his character, who works in a synthetic pet shop and subsists on android sloppy-seconds, Klemow says “We all need someone to love.”

It just about breaks your heart. 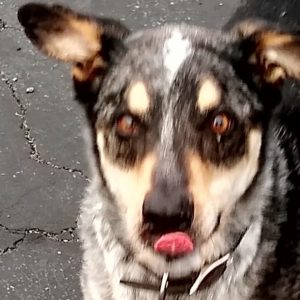