In-n-Out of Favor with the Lord: Fast Food Bible Passages

Rolling Stone Tsarnaev: A Cover Story Is Not A Reward 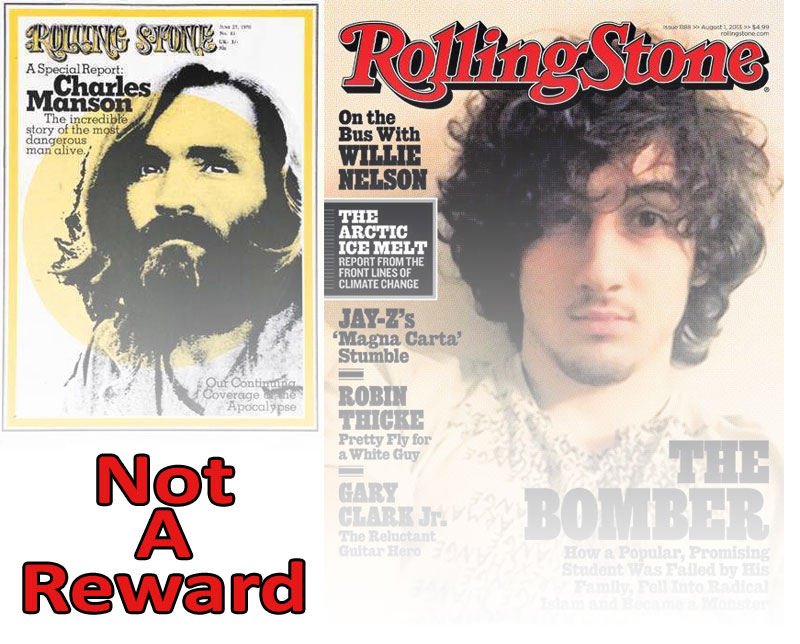 Rolling Stone covers, then and now

Not everyone who makes it to the cover of a magazine has done something good, but Rolling Stone’s decision to cover its August 3 issue with the face of accused Boston Marathon bomber Dzokhar Tsarnaev has drawn the ire of many, including Boston Mayor Thomas Menino. 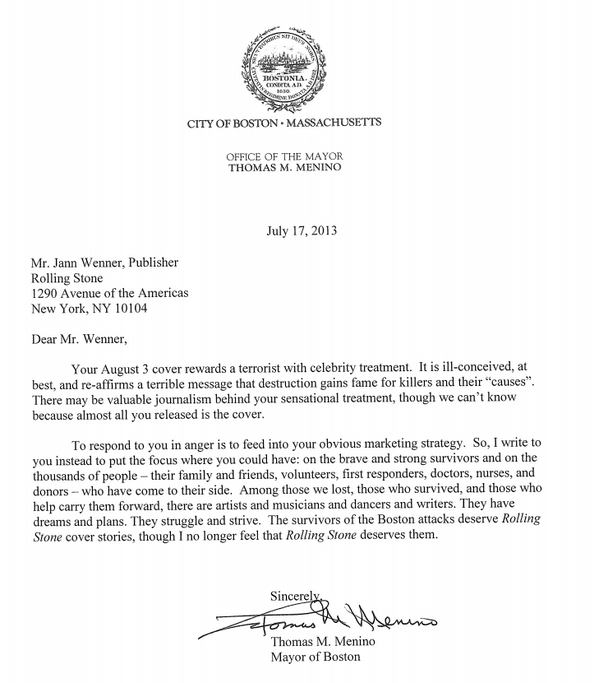 It is easy to understand Menino’s concern, both in the “Boston Strong” aftermath and the notion—expressed in cowboy balladeer Frank Maynard’s song “Streets of Laredo”—that naming a killer gives him power (“Don’t mention his name, and his name will pass on”).

But Rolling Stone—like Playboy—has always been a publication that juggles sober coverage with superficial pop. It has been, from its inception, a magazine that skewed to youth culture. All art and all crime reflects its generation, and Tsarnaev reflects his, hence the cover. When bad people make the cover of a magazine, it’s not a reward.

Was his picture airbrushed to make him look better? Was there a decision to not include the faces of the Tsarnaev brothers’ alleged victims—Krystle Campbell, Martin William Richard, Lingzi Lu, Sean Collier? Were these decisions made for marketing purposes? Certainly. But it is undeniable that Dzokhar Tsarnaev is part of Rolling Stone’s target demographic, and people buying (or boycotting) the magazine might see themselves reflected on the cover, too. He is as much a product of America as he is of his brother’s influence, of Dagestan, of Islam.

Boycotts of the pending issue have already been announced at CVS and Walgreen’s, not because of the article inside (by contributing editor Janet Reitman) but for Tsarnaev’s picture on the cover.

Rolling Stone responded to the outcry on Wednesday:

‘Our hearts go out to the victims of the Boston Marathon bombing, and our thoughts are always with them and their families. The cover story we are publishing this week falls within the traditions of journalism and Rolling Stone’s long-standing commitment to serious and thoughtful coverage of the most important political and cultural issues of our day. The fact that Dzhokhar Tsarnaev is young, and in the same age group as many of our readers, makes it all the more important for us to examine the complexities of this issue and gain a more complete understanding of how a tragedy like this happens. –THE EDITORS

Perhaps it will come out that the Tsarnaevs did seek fame—as Menino suggests—for their “causes,” or even for themselves. If that is so, they have already received it, And a Rolling Stone cover labeled “Bomber” could never be construed as a validation of the crime, just as Charles Manson’s cover in 1970 wasn’t.