There is nothing nicer than when a Massachusetts accent just happens.

While some jobs, like newsmodel and spokecaster, value voices scrubbed free of regionalism, accents are effective shortcuts in establishing location, class, and character in what is sometimes known as the Arts. We learn more about the Southern ladies of “Fried Green Tomatoes,” for example, by how they talk rather than what they say. And the Minnesota Nice accent of “Fargo” is a major part of why that movie is successful. Also, doesn’t Paul Hogan’s “No worries” in “Crocodile Dundee” effectively stereotype an entire continent? That is why a botched accent by an unprepared or lazy actor can take a native speaker right out of the movie (more on that later).

The Boston area’s rich vein of provincial degenerates has spawned two decades of worthwhile movies in which the accent is as central a character as Matt or Ben. Which is why when a Robin Williams or Jack Nicholson murders the accent (and then collects an Oscar for it), it is like Johnny Damon defecting to the Yankees, a duckling getting stolen from the Common, or realizing the Dropkick Murphys only have one song, really. And yes, while I’m happy that my home state is finally recovering from that post-“Cheers”-cancellation slump, it’s a little irksome to see Boston and its environs portrayed as a quirky (but violent!) backwater of simple-minded and hardworking organized crime figures.

So it is especially sweet when the true accent floats up unbidden, un-self-conscious, and incidental. As a Massachusetts native and someone for whom that lilt comes back in sleep, anger, or intoxication, my favorites follow.

How did this guy wind up in Kansas?

Born in Boston in 1879, Jack Haley did not modify his accent for Oz. “The tinsmith fawgot ta give me a haht,” he laments to Dorothy and the Scarecrow. If his delivery sounds singsongy, that was the style. Both your kindly aunt and Whitey Bulger talked that way as they buried you in the basement.

There is absolutely no way that Fredric March, Dana Andrews, and Harold Russell lived in the same town, and yet there they are, three returning vets who meet on the way home from the Pacific and stay in touch as they readjust to civilian life, post-World War II. It is a lovely movie that, no matter how much you like “It’s A Wonderful Life” (which came out the same year), deserved its Best Picture Oscar. Russell, who grew up in Cambridge, MA and who’d lost both hands in a TNT explosion on a stateside Army base, plays Homer Parrish, whose hooks, he fears, will make his girl Wilma go sour on him (she doesn’t, because Wilma is a peach). In addition to having no hands, Homer is the only person in his family, neighborhood, or town with a Massachusetts accent. Even his uncle Hoagy Carmichael seems confused.

Homer confides to Wilma that his injuries mean he “cahn’t smoke a cigarette awwah read a book.”

Director William Wyler cast Russell because of the documentary “Diary of A Sergeant,” which follows Russell through a staged version of his extraordinary recovery. Sadly, the documentary relies on someone else to do the voiceover. Broadway star Alfred Drake, as Russell’s diary entries, does not attempt the accent. (Maybe they should have got Jack Haley.)

While the Kennedy family brought the Brahmin version of the Massachusetts accent to worldwide attention, and Boston-bred politicos like Speaker of the House Tip O’Neill and mayors Kevin White and Ray Flynn often had national exposure, the accent tends to segregate and classify politicians as scrappy holdouts of the machine system, or somehow aloof, even when they are being sincere.

Here is Mayor Kevin White on April 5, 1968. Riots are erupting around the country after the assassination of Martin Luther King, who had earned his doctorate at Boston University. Introducing James Brown at the Boston Garden, White is heah to rememba Mahtin in peace.

In official pronouncements such as these, I hear every male teacher, relative, and priest telling me to straighten up. Whereas when the accent occurs in the wild, it can be magical.

Moulty: The Man And the Song

One such occasion is the Barbarians’ 1966 song “Moulty.” Like Harold Russell, Barbarians’ drummer Victor “Moulty” Moulton had an accident with explosives. Growing up “wild” in Provincetown, at the tip of Cape Cod, Moulty enjoyed building homemade bombs (I’d say, “as one does in Provincetown,” but one does not; building bombs is simply not what Provincetown residents are known for). One of these improvised explosive devices blew off Moulty’s hand when he was a teenager.

Moulty was a survivor—and he didn’t want no pity—so he learned to hold a drumstick in his left hook and formed a band that would later share a stage with the Beach Boys, James Brown, and the Rolling Stones. Emerging “from their caves in old Cape Cod,” Moulty and the Barbarians traveled to Santa Monica to appear in 1964’s “The T.A.M.I. Show.”

(We can imagine James Brown, four years later, wondering how Moulty grew his hand back and became Mayor of Boston.)

In “Moulty,” the drummer says that, now that the music thing is finally starting to happen, all he wants is a real girl. Where was Moulty’s Wilma?

Moulty is still alive and has been running a carpet and upholstery cleaning business in the town of Abington since 1982. In an interesting student interview on Transom conducted a few years ago, Moulty says that his wife will understand why he maintains he still has not found the “real girl.” Lotta haht theah, Moulty.

Robolar or Robillard from Mahs

In my hometown there was a department store called Mars, and once someone asked me if I worked there. “Ah you from Mahs?”

If one occasionally feels like an outcast—as if he is from the planet Mars—perhaps to be asked that question in that accent somehow fuses the accent with the feeling of being ostracized. Had I been asked if I worked at Caldor, maybe I wouldn’t still nurture that association.

In any case, a local commercial we saw as kids featured Robillard (the only Youtube clip I could find was titled as the actor pronounced the name, which is different from how everyone from Massachusetts knew to spell the name of their French-Canadian brother in-law, for example). He, too, is from Mahs. Why is an alien clearly raised in Fall Rivah somehow in space? No clue, but Star Lord’s journey in “Guardians of the Galaxy” made me think that Robillard had a similar experience.

There is talk that Robillard was Jay Leno, but I reject this, as Leno went to Emerson College and they would have beat that accent out of him. I deah-ly wish I knew what this actor went on to do, and what happened to his suit. 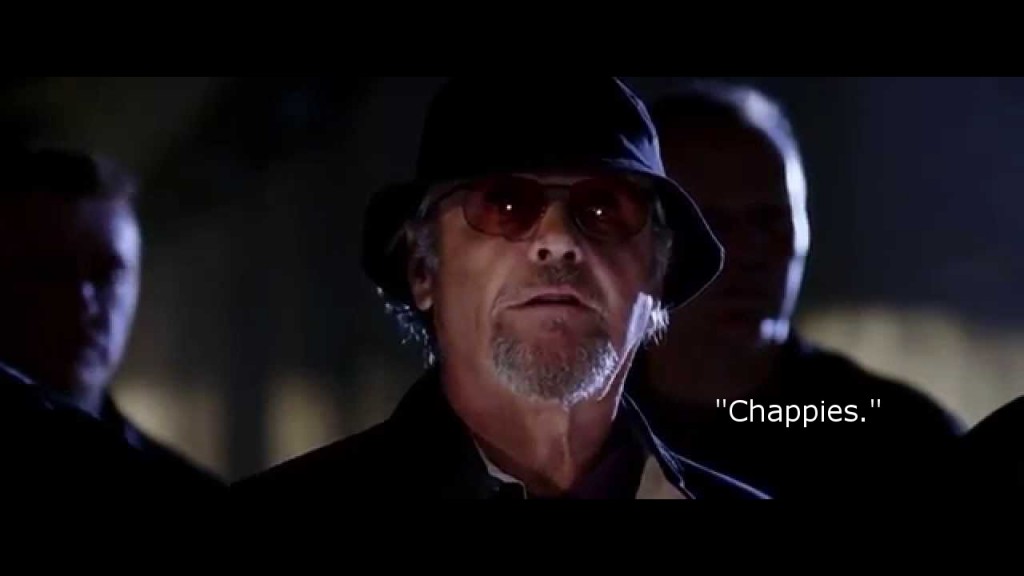 The Massachusetts accent isn’t achieved simply by dropping an R. It requires replacing one’s Os with schwas, removing terminal Gs, sliding in an aspirated H after a T like the Irish, dealing in double negatives, omitting the T in “to” (“Goin’a” rather than “going to,” or, if one’s lace curtain relatives are coming over, “Goin’tuh”), and punching people in the face. Or none of these things. Or maybe just the threat that you might do these things. To hear Robin Williams say “Faht” in “Good Will Hunting” is an abomination, and Jack Nicholson’s handling of his accent in “The Departed” is as cursed as the Overlook Hotel.

But at least those guys tried and failed, in roles that required the effort. Playing an Army officer, Oscar winner Forrest Whitaker didn’t even need to be from Massachusetts in “Arrival” (2016), but just look at what he does here.

Is he trying to summon Robillard?

In jovially hinting at violence, Matt Damon expertly calls up an accent that mainstream stardom requires its personalities to shed.

But it is Mark Wahlberg’s interrogation of Leonardo DiCaprio (another Oscar winner who sinks into Jordan Marsh) in the same movie that nails the Boston accent in film. Wahlberg forgets he’s an actor here (especially at 3:13) and is instead about to whale on some kid from Dedham at the Southie St. Patrick’s Day parade.

A Whitey Shade of Pale 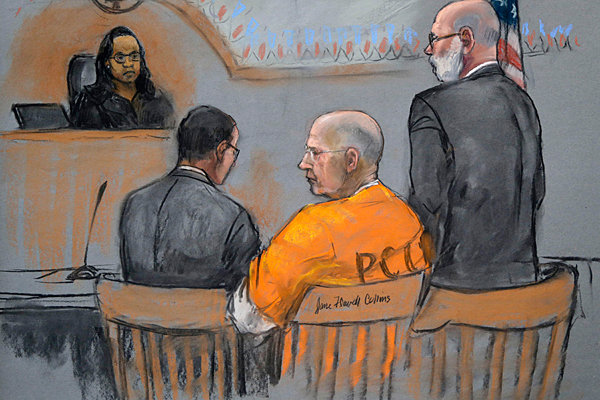 Finally, let’s travel to South Boston for Whitey Bulger’s arraignment. Shelley Murphy of the Boston Globe reports from outside the courthouse, where victims and their representatives are interviewed. She’s a newspaper reporter called up to speak in front of a camera, and she’s not too comfortable (it looks chilly). A series of victims, witnesses, and attorneys give Forrest Whitaker a lesson in how to talk the talk. There’s nothing cheerful here, but there is anger and vengeance and a little bit of humor, which seems to sum it all up. The humor on top masks the pain below. “I hope he (Whitey) enjoys every day of his retirement (in prison),” David Wheeler says.

Oddly enough, this man doesn’t have an accent, but you can tell where he’s from.