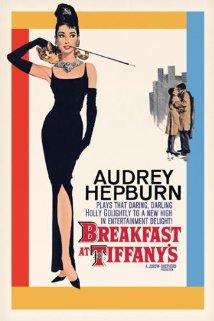 My daughter learned to speak from hearing this song.

I sang “Moon River” to her while she was in the incubator and, later, when I drove her home in the back of my Saturn, the first song that came on the radio was Black Sabbath’s “Paranoid.” One was planned, the other was magic.

As she grew, she was first able to fill in the blanks of the song, and then sing it on her own. For three years she was my only child, so the idea of “two drifters off to see the world” made me think of the two of us. Sadly, I never had that huckleberry friend feeling with her mother.

Sometimes I think, in an academic way, that my life had to have changed when she arrived, but I’m not too sure that who I was and what I’d be doing instead are not who I am and what I’m doing already, albeit with less sleep. Instead, she and her little brother make me want to be the best version of myself (which happens to include getting more sleep).

Sometimes I or the world get in the way, but that is still the game plan. And she is such a wonderful teammate. I find a lot of things amusing, but she and her brother make me laugh consistently.

Written for Audrey Hepburn to sing in “Breakfast at Tiffany’s,” the first lines of “Moon River” were originally “I’m Holly, like I want to be / like Holly on a tree back home.” The “back home” was the Back River in Johnny Mercer’s native Savannah, and his “huckleberry friend” was not a reference to Huckleberry Finn — also a fan of rivers — but a boyhood friend with whom Mercer used to pick huckleberries by the riverbank.

I’m the only person I know who doesn’t like “Breakfast At Tiffany’s.” I don’t like Holly Golightly’s character. I don’t think she’s adorable or irrepressible. I feel sorry for Jed Clampett and Hannibal Smith. I think Mickey Rooney is offensive. The only characters I can tolerate are Patricia Neal’s (then married to Roald Dahl, whose books I read to my children) because of her cold common sense and party guest Vilallonga. I like to think of worlds in which party guests only need one name.

For its sweetness and aspiration, for its sadness and hope, and for the fact that it shares with one of my other favorite songs (“Strawberry Fields Forever”) a reference to a berry, “Moon River” and its many incarnations is probably part of many family histories.

Audrey Hepburn looks to be strumming her own 3/4 size guitar in the first version the world saw:

Morrissey does a great rendition and makes it his own. His few lyric changes are thoughtful and personal:

Innocence Mission is an American band, though the ethereal, fairylike voice of Karen Peris makes me think she grew up shrouded in mist in some fairy ring by a henge somewhere. Their version is my second favorite:

My favorite, of course, is this one, recorded the night before her brother was born:

Moon River, wider than a mile
I’m crossing you in style some day
Oh, dream maker, you heart breaker
Wherever you’re goin’, I’m goin’ your way

Two drifters, off to see the world
There’s such a lot of world to see
We’re after the same rainbow’s end, waitin’ ’round the bend
My huckleberry friend, Moon River, and me