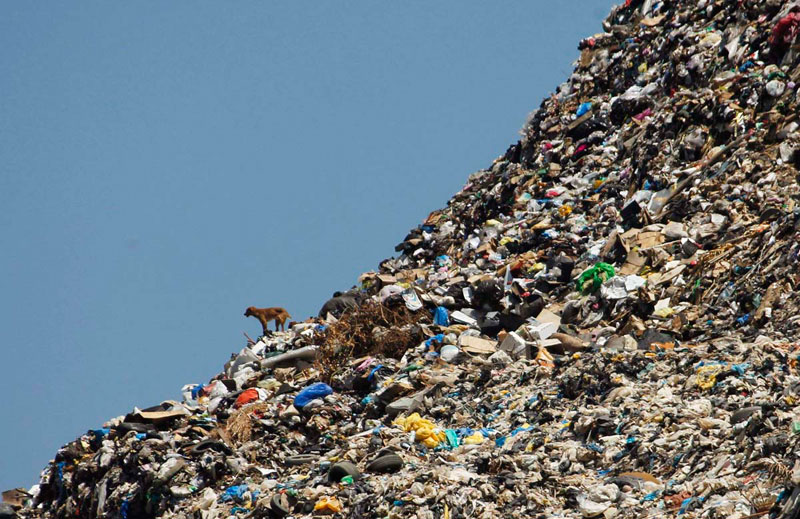 Years ago, when my now-deceased godmother took me to Disney World (she was not then-deceased, as the Kingdom ain’t that Magic), I was impressed with the lack of litter. It gave the place a classiness that no preponderance of recent evidence can shake. Classy Orlando. Like that line from “Monty Python And the Holy Grail”:

Not only in the park but throughout a good portion of Orlando, things were just clean. Back home in the Highlands of Damnucketville, I’d grown used to seeing cigarette butts, candy wrappers, tires, toilets, mattresses, and AOL discs tossed into the street as if people weren’t aware that the Earth was their mother.

“Do you put AOL discs on your mom?” I’d say, walking the streets of my town.

Of course, there are cast members to clean up Disney’s trash, and not even corn dog vomit remains on Main Street very long before it is hoovered away. But something bigger is at work: the lack of litter is infectious. Seeing none, people aren’t compelled to create any.

The opposite is true, too. When there’s enough ambient garbage that people think there’s no point to keeping things clean, they stack their casual trash.

As Arlo Guthrie argued in “Alice’s Restaurant,” when he and his buddy saw a pile of trash in a ditch:

…we decided that one big pile is better than two little piles, and rather than bring that one up we decided to throw ours down.

The Disney picture stuck with me from the time I was 11. Because I wanted to create a Disney World of the Mind, I wouldn’t litter. I’d walk an extra block for a public garbage can. Even in the poorest neighborhoods, there’s no such thing as a Garbage Can Desert.

And I became a little militant about it. When I was younger, and childless, and immortal, I got it into my head to follow cars from which I’d seen drivers toss their Burger King bags (both times it was a Burger King bag). I’d pull over, pick up the bag from the gutter, and roll up on them at the next light.

It was really stupid of me to do, but the first guy said sorry, and we passed the Burger King bag like a jar of Grey Poupon between our cars. That gave me the confidence to try a second time, and this attempt ended in failure; the driver refused my trash redistribution so I ended up tossing the bag through the guy’s back window where I think it hit his child.

This was Los Angeles, and I was driving a Saturn. It was a Reign of Terror. 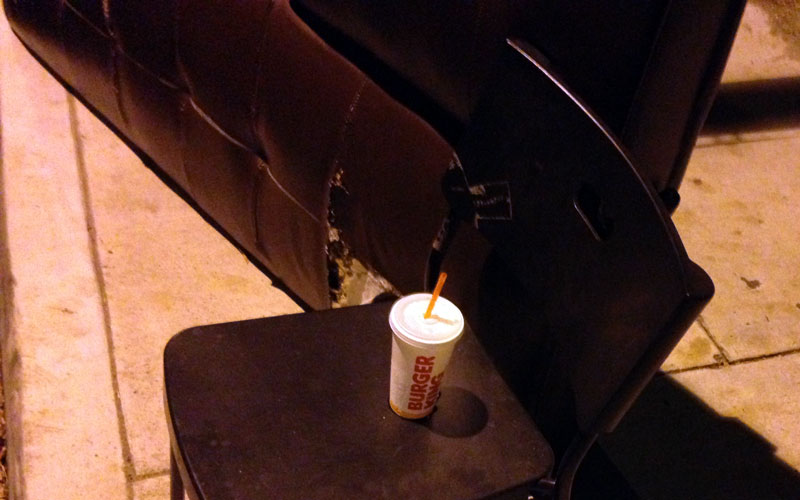 In the post-Christmas curb buffet of discarded trees, Ikea chairs, and those gift boxes from which people extract the alcohol bottles but leave the stupid logo shot glasses and velvet carrying bags that is Los Angeles (the person who ports his liquor in a cinched-up velvet satchel might be the same person who was hit by a Burger King bag as a child), I walked the dog past a futon mattress and a chair that were destined, I expected, for one of three fates: the City of L.A.’s Bulky Item Pickup, the midnight Jawas who grab the empties from the recycling bins, or opportunists with upholstering life skills that I, myself, do not possess.

The next night both the mattress and the chair were still there, but a Burger King cup was now on the chair. The night after that, the chair had been appropriated but the mattress remained, and the cup was placed on top of it. At this point I asked my daughter to pluck the cup from the mattress, walk three yards, and throw the cup in the trash, which she did with very little effort or strain. 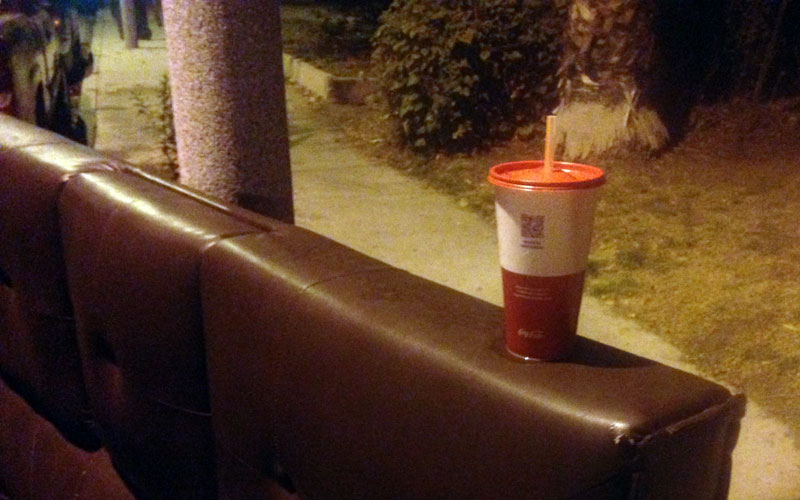 As the Second Amendment clearly states, “Don’t litter, don’t try to get into the subway car/bus while people are trying to get out of it, and don’t speed up when you see the car in front of you activate its turn signal. What are you, A Jerk?”

The nearest Burger King is about a mile away. The journey of this cup to the top of the futon mattress is probably a trail of tears. Maybe its bearer gave up, lost hope, and thought, “someone else will take care of it” like war-torn families trusting their children to strangers for the possibility of safety and a better life (he was right). Maybe he thought, “I like to put things on top of other things.” Maybe he thought, “The combination of the remainder of my Dr. Pepper, this chair, and this futon mattress will be a balanced meal for a special kind of goat that eats only garbage and furniture.”

I don’t know. I can’t see into people’s hearts. I can’t even see into the back windows of moving vehicles. So I can’t judge others’ actions except to say that, according to my own statistics, people who eat at Burger King are litterbugs.

Previously on the Refenestrator: Adding Trash to Trash—A Poignant Gallery (or, I even recycle my musical references without knowing)