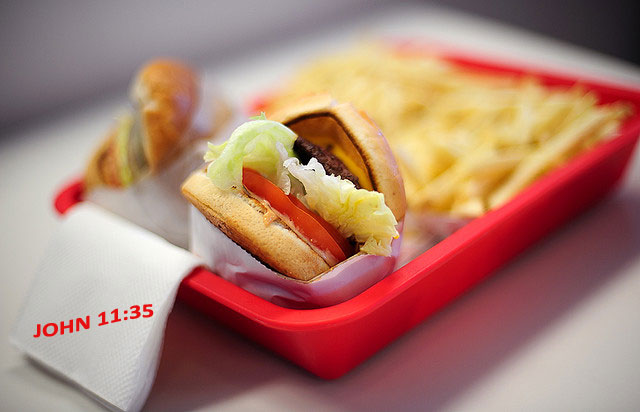 The Lord Wipes Those Who Wipe Themselves

As much as a first visit to In-n-Out Burger is a revelation (“How can fast food burgers taste this good?“), it’s that much more special when a customer finds a verse from the actual Book of Revelation on his hamburger wrapper.

Since 1948 In-n-Out Burger has been a southwestern craving; a friendly burger chain with a simple menu, nearly 300 locations throughout California, Arizona, Nevada, Utah, and Texas, and Bible verses placed discreetly on the packaging of its signature fare. Today I, a lapsed Catholic Bible scholar (and those are the worst kind, really) try to draw some connections between the menu item and the type of salvation it promises.

To be clear, it’s not the verses themselves written on the packaging, but the book, chapter, and number of the verse. So not only must diners really be on the lookout for their Biblical metadata, which might get lost in the logo or copyright information, but they must also go home and check their Bibles.

They could also do as I did: track down the verses on my phone while waiting for the warm cheese of a Double Double to slowly drape itself over my heart. 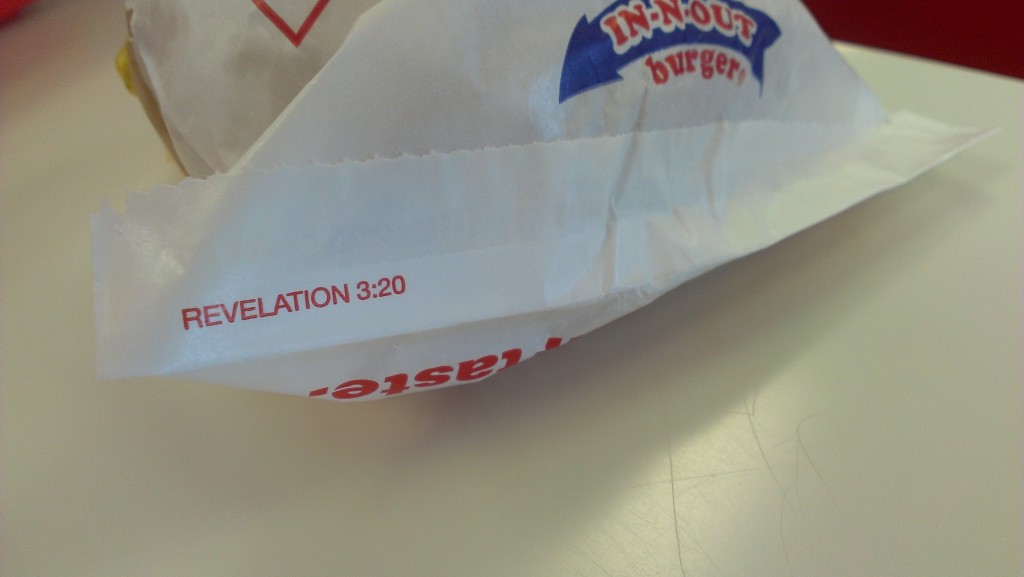 Verse: Revelation 3:20
Food item: Hamburger and cheeseburger
Meaning: “Behold, I stand at the door and knock. If anyone hears my voice and opens the door, I will come in to him and eat with him, and he with me.”
Interpretation: It’s pretty early in the Apocalypse when this verse shows up, so it seems reasonable that The Lord might want to start things with a hamburger. It’s presumptuous to think that as soon as The Lord walks in, you’re all going to eat, though. One assumes that The Lord has more important things to do than chew and digest when His creation is coming to an end.
Summary: It makes sense that if you hear someone knocking, you’d open the door, and that if you’re eating, you’d share it. Good advice. 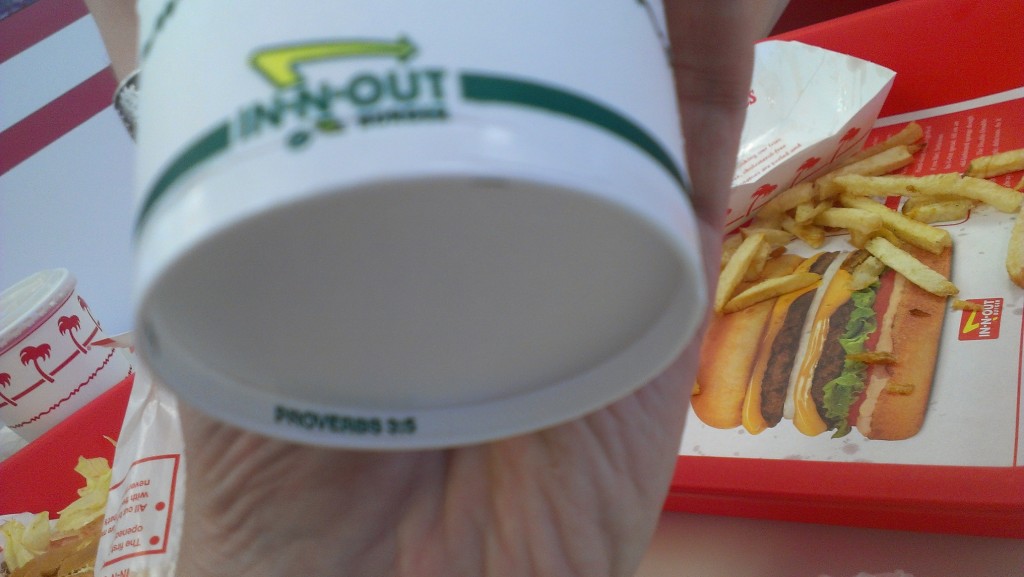 Verse: Proverbs 3:5
Food item: Milkshake cups
Meaning: “Trust in the LORD with all thine heart; and lean not unto thine own understanding.”
Interpretation: When my children say, “This milkshake is too difficult to suck up through the straw! It’s hurting our brains!” I say something like: “Do what you’re told and stop thinking for yourself. You think you’re smarter than your old man? Don’t you think I want you to have nice things? This is a luxury, right here. Drink the damn milkshake.”
Summary: Don’t think for yourself; just drink the milkshake. You’ll be fine. 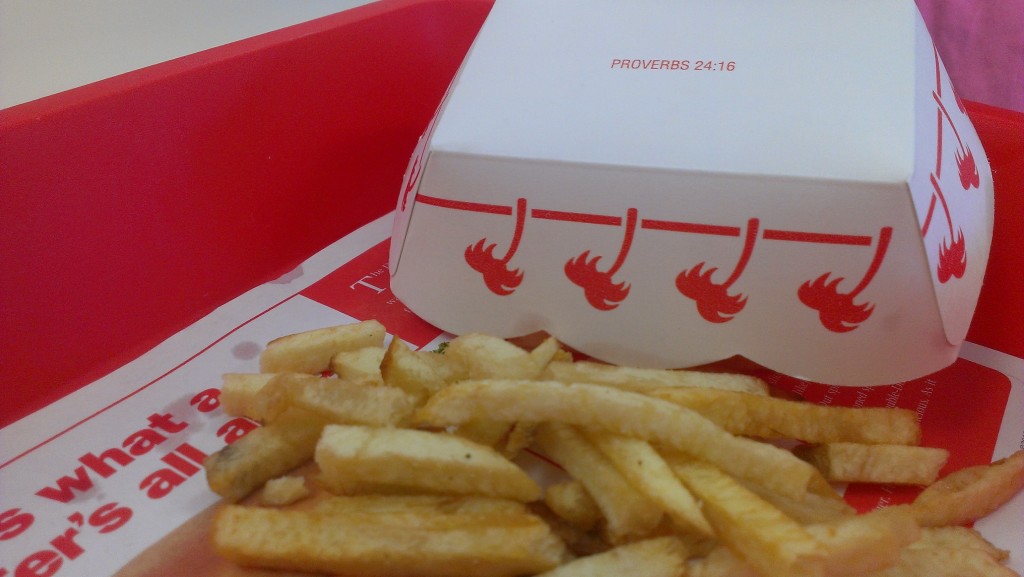 Verse: Proverbs 24:16
Food item: Fry boats
Meaning: “For though a righteous man falls seven times, he rises again, but the wicked are brought down by calamity.”
Interpretation: Once I was in an In-n-Out in Las Vegas when a man clearly suffering from some kind of withdrawal walked in. He fell at least seven times, but did not appear to be righteous. Full disclosure: I wasn’t having a particularly righteous weekend myself.
Summary: That is some heavy stuff to think about when you’re eating your fries. I guess the first time you fall, it could go either way. It’s like Schroedinger’s Proverb. Falling once, you could be righteous OR wicked. The answer is in whether you get up. If you just lie there, you’re wicked. No more french fries for you!

Verse: John 3:16
Food item: Drink cups (excluding milkshakes)
Meaning: “For God so loved the world that he gave his only begotten Son, that whosoever believeth in him should not perish, but have everlasting life.”
Interpretation: Coke adds life, I’m told.
Summary: This money shot of Bible verses seems like it would be more appropriate for the packaging of a burger. After all, the restaurant is named In-n-Out Burger, not In-n-Out drink cup. Maybe more orders come with drinks than burgers. Me, I feel that if the person choosing Bible verses for the packaging had seen fit to quote Nahum, that he might have gone for something less mainstream than John 3:16. Or maybe he was a particularly big Nahum fan, and in order to get Nahum on the Double-Double, he had to put John on the drink cups. I suppose that’s a very hipster way of looking at it.

Verse: Nahum 1:7
Food item: Double-Double
Meaning: “The LORD is good, a strong hold in the day of trouble; and he knoweth them that trust in him.”
Interpretation: Sometimes the anticipation of a Double-Double outshines the gastric experience of it. Halfway through I usually feel like sneezing cheese, and that my pores are going to open up and ooze cheese. Up until that point, though, it’s really tasty. In fact, as I keep eating, and then eat the next one, the feeling goes away.
Summary: I guess you need to trust in The Lord if you’re having angioplasty, and The Lord will know if you’ve been faking it all this time.

I’d think that if In-n-Out’s founding Snyder family had gone through all that trouble to secret those verses on their wrappers, that they would reward customers with something more relevant to what they were actually eating.

For example, on a Quadruple-Double (the largest legal burger In-n-Out sells, with four pieces of meat and four pieces of cheese), an appropriate verse might be Romans 14:2: “For one believeth that he may eat all things: another, who is weak, eateth herbs.”

Or for the special, speakeasy menu that features “Animal Style” and “Protein Style” offerings, Matthew 7:10: “Or if he ask a fish, will he give him a serpent?”

Or at the very least 1 Kings 19:8: “And he arose, and did eat and drink, and went in the strength of that meat forty days and forty nights.” I often don’t need to eat for a day after I have In-n-Out burgers, and plan to get a whole bag of them the next time Satan tempts me in the desert.

Below, my suggestion for the napkins:

1 thought on “In-n-Out of Favor with the Lord: Fast Food Bible Passages” 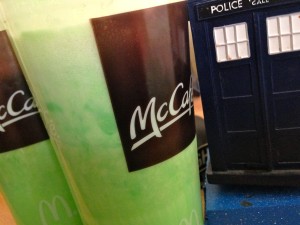