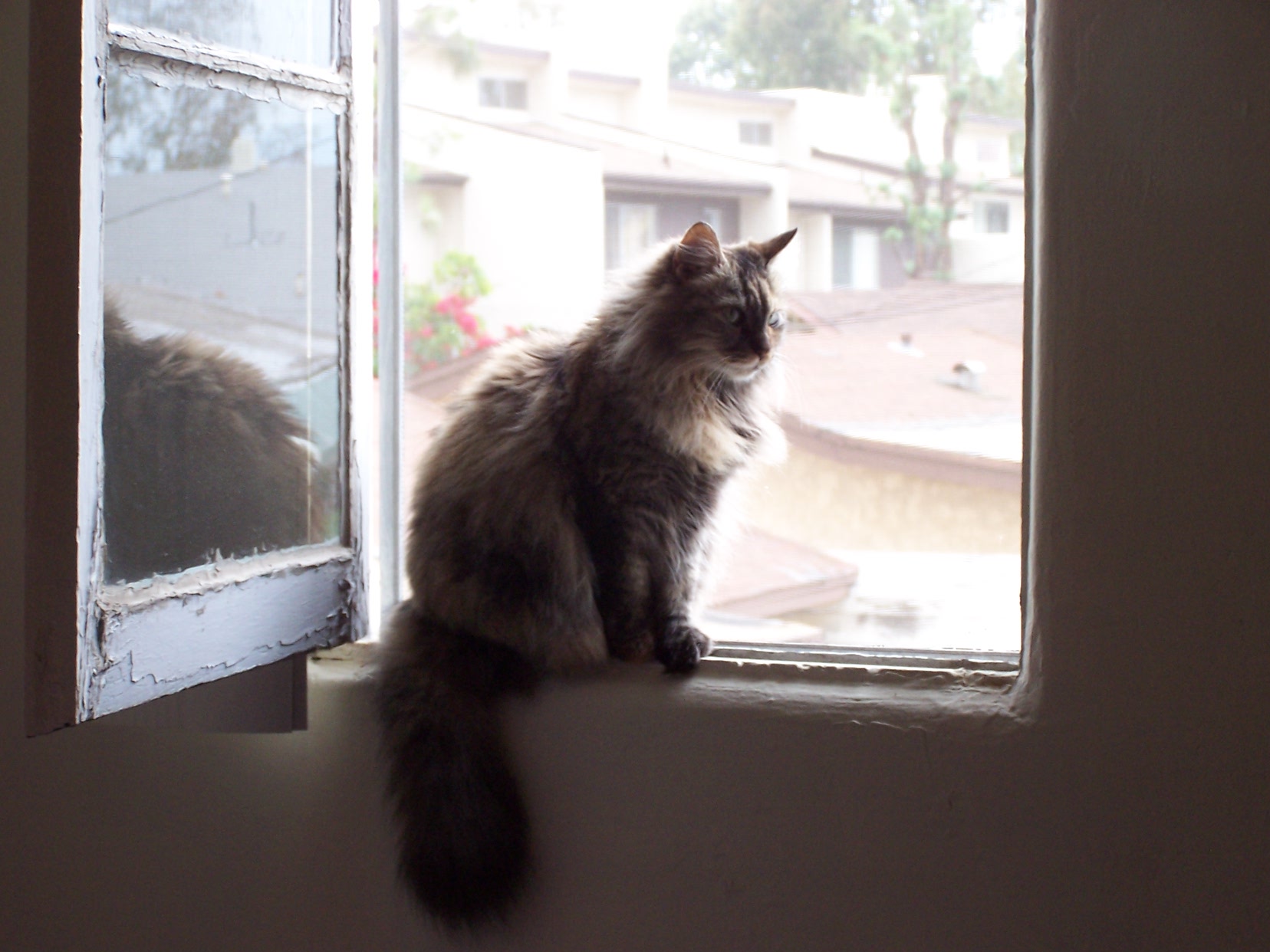 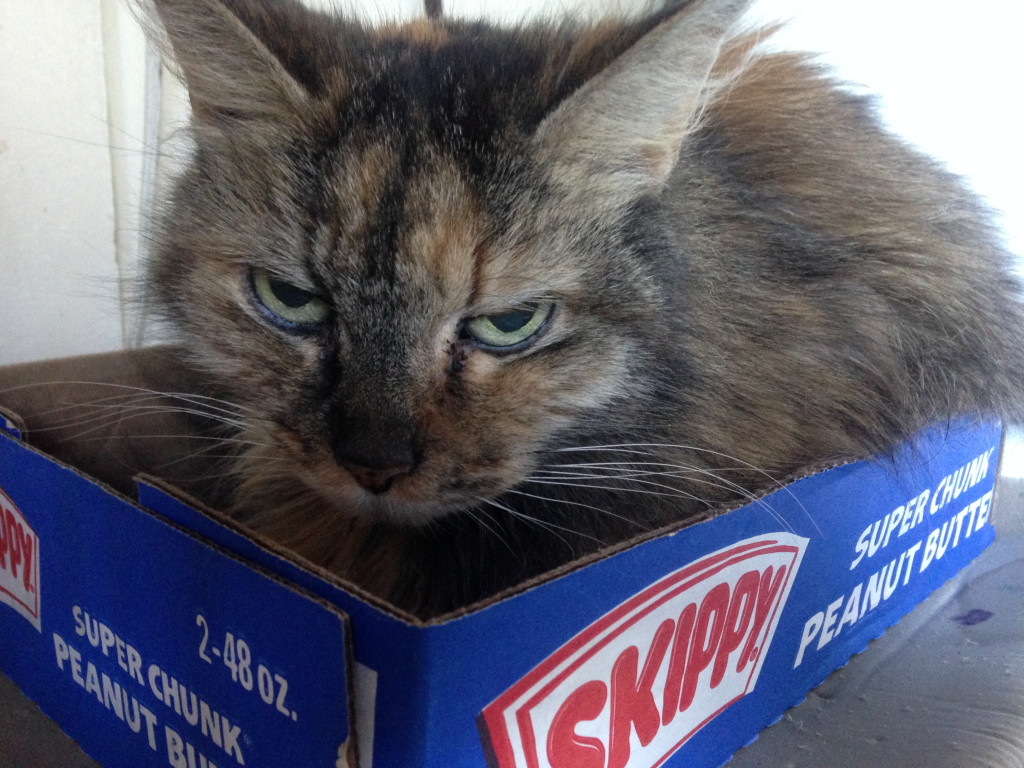 Our beloved cat and friend to all, Frampton, died in the center cushion of the Brown Couch yesterday. Born in a Dumpster in Chelsea, MA, she and her twin sister, Roswell (d. 2004) traveled 3100 miles and lived in seven apartments on two coasts. She outlived eight other cats and the relationships that brought them, as well as a dozen catless girlfriends. She mentored Gordon Thunderfoot, the Dog, and was a sweet companion to Marisol and Harrison, the Children.

When I would come home to my apartment in Boston, Frampton would follow me the length of the house to a table. She’d leap on the table and demand affection. She was adamant about our equality. She was allowed on tables throughout her life, especially when she became a deaf old lady, yelling for lunchmeat scraps when I’d pack the kids’ sandwiches.

As a child and young adult, I never understood why people liked cats. Cats seemed ungrateful of the food and shelter lavished on them, didn’t do worthwhile tricks, and lacked humility. I was day-drinking in a bar in Downtown Crossing when I told my server, Robert, that I’d discovered mice in my apartment.

“You should get a cat,” he said. “My neighbor says a feral cat just gave birth to a litter in his garbage and he’s going to throw them all in the Pines River if someone doesn’t adopt them.”

I’d lost my dog of 12 years just two years before and I didn’t have the time to stay home and raise another one. I thought, “Maybe if I raise the feral cat as a dog, I’ll have a pet who I don’t have to walk but who won’t withhold affection.”

It didn’t work that way, but I never saw a mouse again. Roswell, so named because she looked like an alien, and Frampton, who had a hairstyle reminiscent of Peter Frampton and a tendency to leap in the air and bolt away from a standing position, soon taught me the solace of cat ownership and the value of earned affection. She was even Cat of the Day in 2010, and earned plaudits from crazy people.

Still, I didn’t start to adore Frampton until I moved to California. Maybe because she also felt displaced and noticed that I was the only constant in her life, she began to follow me more closely. She’d be the only one still present in all the comings and goings. Wherever I sat, eventually she’d show up, evenly distributing 1.5 lbs. per paw. 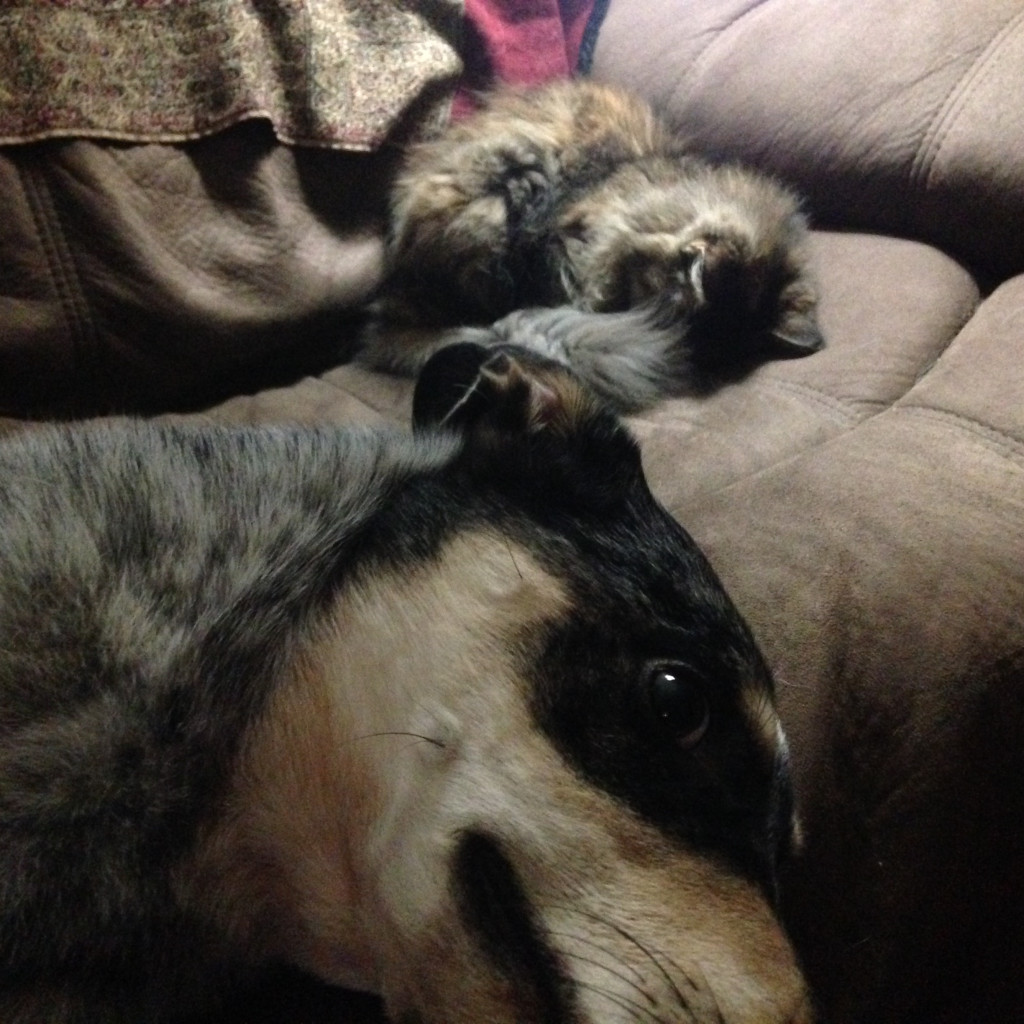 Dogs are usually the public face of any pet household, so Gordon had the biggest social networking footprint. But it was the people who made it past the front door who soon learned of Frampton’s charms. Until her very last day she would greet guests, crawling onto their laps and purring through her increasingly-apparent bones. In her last year she’d spend her days sitting motionless, head down, in a patch of sun, or sleeping in a Skippy Peanut Butter box from Costco. At night she’d get more active, often climbing the ladder of the kids’ bunk beds and sleeping in a special bed up there, or simply finding a lap while we watched TV. 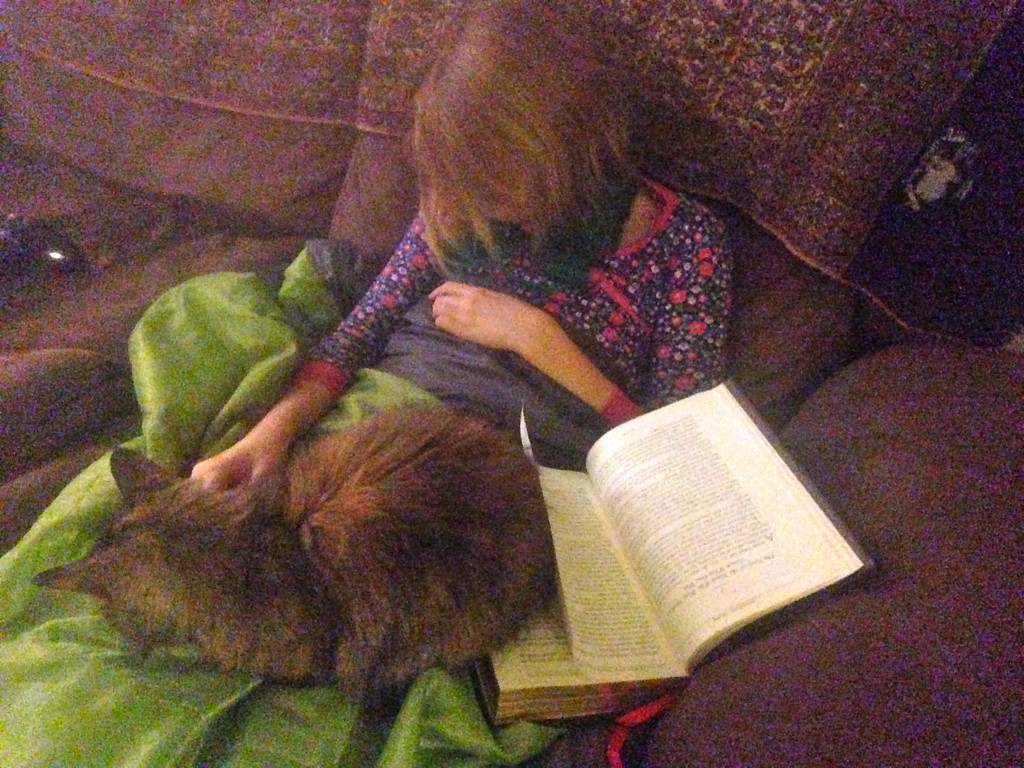 She had been fading for a while, but still very much Herself, when we went to visit family for Christmas. She and Gordon were watched by a great couple, but it was clear when we returned that Frampton was just holding on. She walked through the house uttering what we called Piteous Meows, she wouldn’t even eat tuna, and she’d sit still in odd places, like between the shower curtains. Jetlagged and exhausted, we all watched a movie on December 29 and she climbed on my lap again. I hope I was gracious. 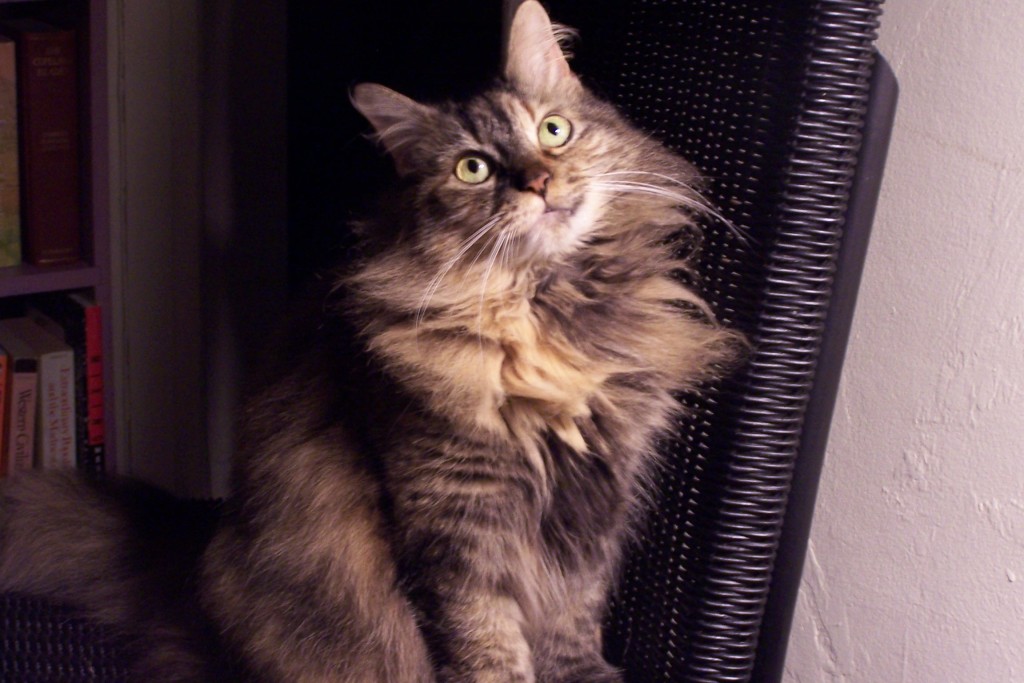 Finally, on December 30, she arranged herself in the middle cushion of the Brown Couch and we watched as her breathing got shallower. Several times we thought she’d died but she’d rally. Her eyes got glassy. She didn’t respond when some very nice ham was placed near her. We thanked her for her 18 years of being the best friend and companion, the home fire, and told her it was OK if she left. Then she did.

We arranged her with flowers and took pictures with her body, because we’re Mexican now. 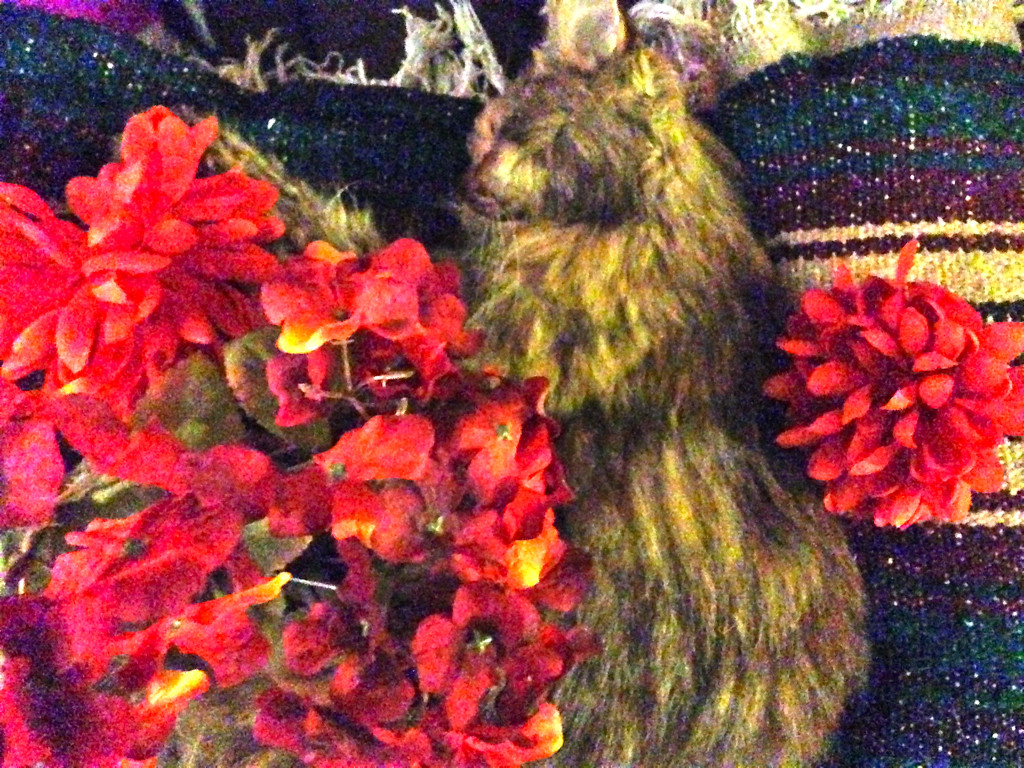 We’re all heartbroken and it was difficult to feed Gordon this morning without Frampton muscling in. The dog is a major presence in the house but we’re all aware she’s gone. Gordon’s capering seems to echo where it didn’t before.

I was always pretty clear with Frampton about how much I appreciated her, and I liked to think that she was satisfied that she’d outlived all unworthy claimants to my affection (they weren’t unworthy, but she outlived them still). Therefore I like to think, also, that she waited for us to come home in order to die, and that she died knowing that the next one would be the right one.

Of course, that’s how we romanticize death. We cut some of her hair for a memorial art project, and then I called the City to take away her stiff, 4-lb. body in a garbage bag. I gratefully threw away her catbox and hung her bowl on the wall. I’ll be vacuuming her hair for months.

I am not a fan of Hallmark card quasi-religious stuff like the Rainbow Bridge or this (though they both make me sobby), but if there’s a postseason reward for cats like Frampton, she’s got it now.