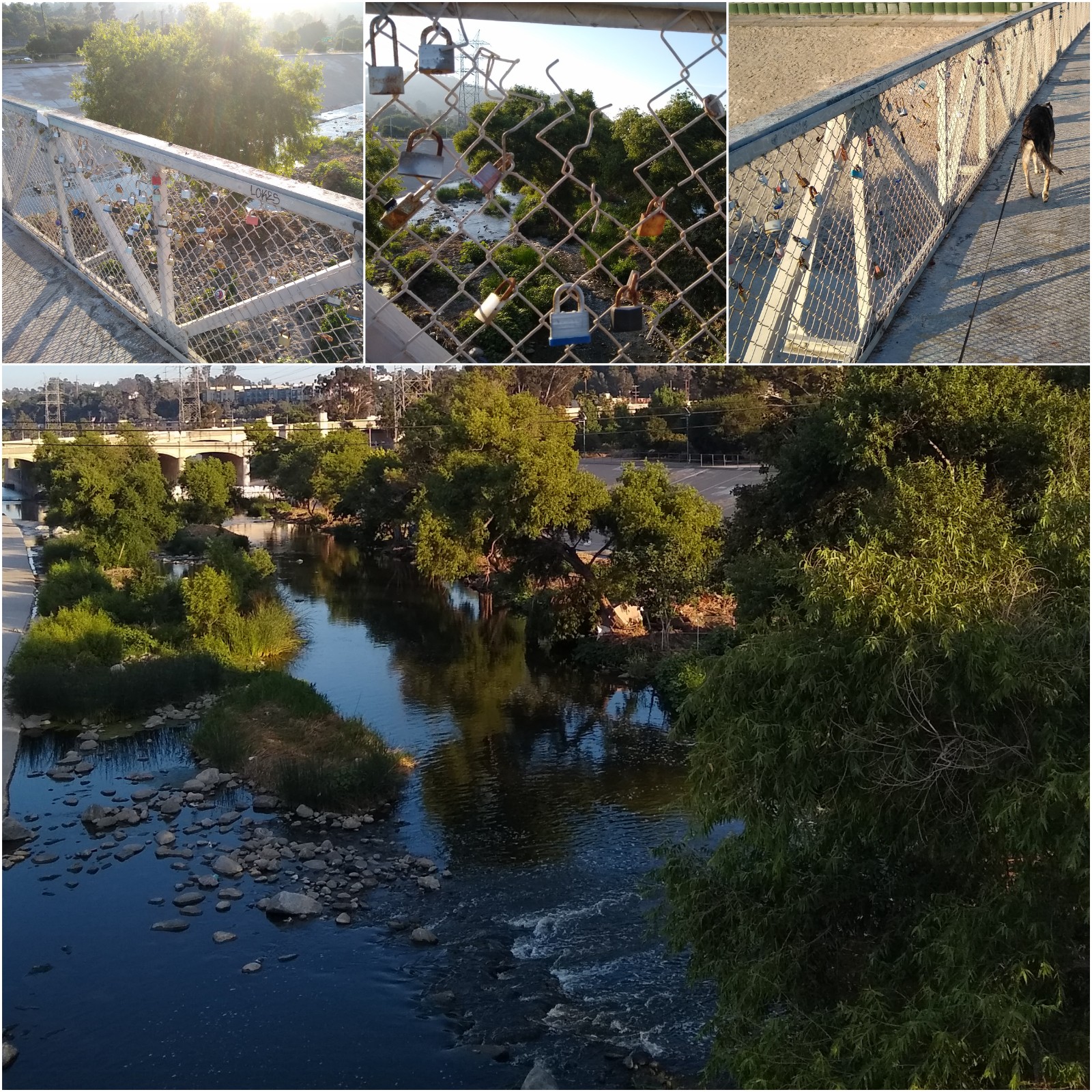 One of my favorite places in Los Angeles, this walking bridge spans the Los Angeles River from the neighborhoods of Atwater Village on the east to Los Feliz on the west. It’s officially known as the Sunnynook Pedestrian Bridge, but I’ve been lobbying to get the name changed to The International Fogelfootbridge for Peace And Feelings.

A few years ago, the IFPF began sprouting “love locks.” As my family and I would cross the bridge to Los Feliz, it was nice to see more and more of them. I didn’t even worry that their collective weight might eventually send the IFPF and us hurtling to our destruction in the negligible waters but significant concrete below, as my romantic thoughts usually win over my catastrophic ones. 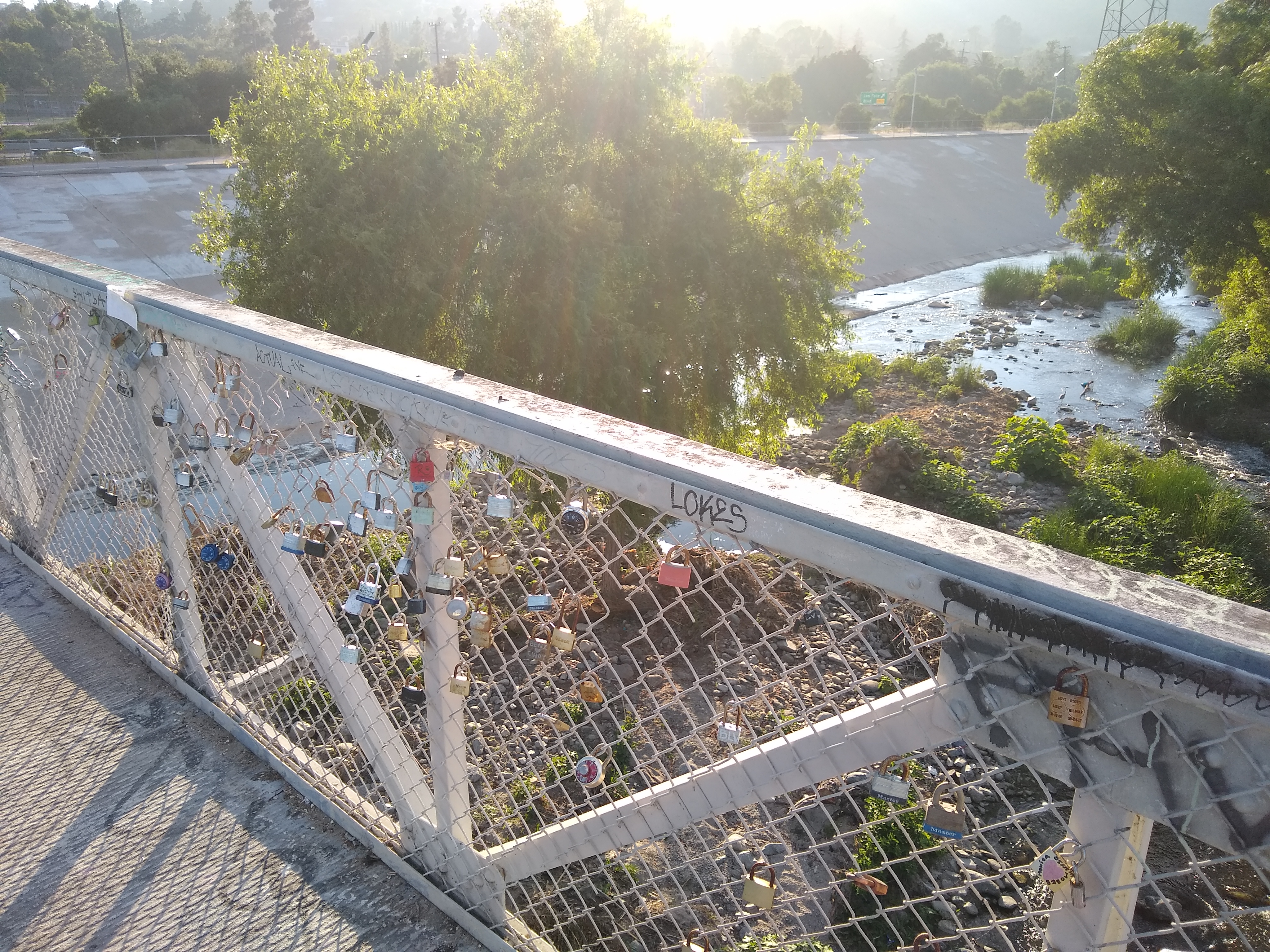 We’d cross the bridge to collect tennis balls for our dog in the weeds outside the public courts. We’d always restock our supply with a few, but our record is 32. We’ve been doing this for the seven years Gordon Thunderfoot has been alive. The idea of buying a tube of tennis balls—or even playing tennis—sounds tremendously wasteful to me. And, like all fathers, I hope my children adopt my prejudices. I don’t mind if other people play tennis, just give my dog your cast-off balls.

Two years ago I was living high on the hog and had enough money to buy a lock of my own. I unwrapped its special packaging from Ace Hardware in Glendale, Sharpied my initials and those of my beloved on the solid, ridged edges and, as my girlfriend and I crossed the bridge, I whipped it out. I forget what she said, but I’m sure it was pleasant. Then I attached the lock to the north-facing mesh, in the same upriver direction News Chopper 5 flies to catch car chases on the 134.

It is at that moment that the relationship went wrong. 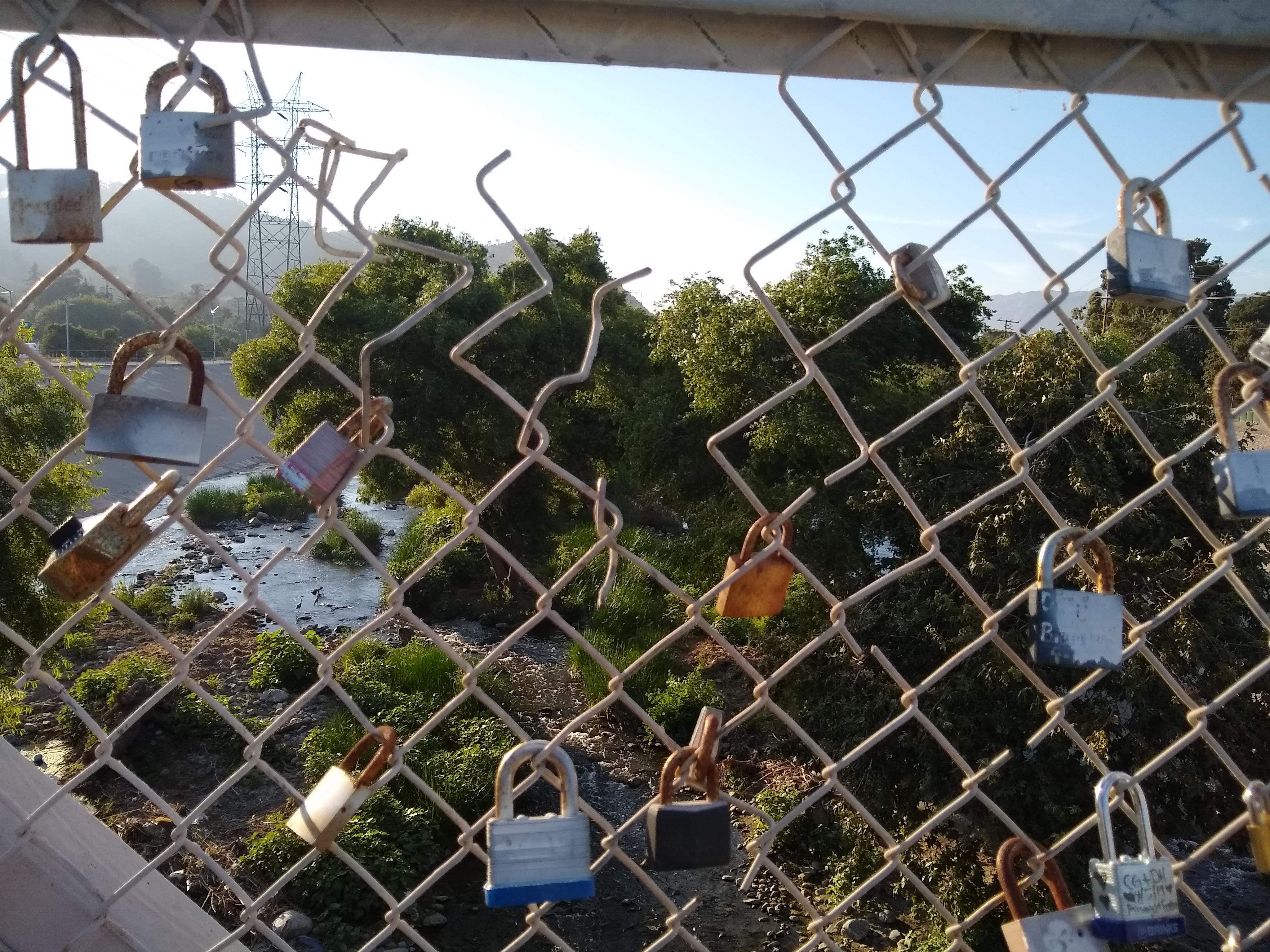 Breakups are tough no matter what, even if the most powerful feeling in the pungent stew of their aftermath is relief. As lovely as this relationship often was, we simply should not have ever gotten together. It was like the way the 5 sometimes shares surface space with the 60 and the 10—yes, they’re all traveling in the same direction for a minute, but if one wants to go to Pomona and the other to Santa Ana, or if one has spent a considerable amount of time in Coalinga, can you really be surprised when it doesn’t work out?

But if we can crystallize a time and date where good intentions met fatal flaw, Love Lock Day was it.

Because it was that day, just a half mile from where the Manson family slaughtered the LaBiancas, that in my big-hearted delirium I chose the wrong Ruth Gordon movie.

In “Harold And Maude” (1971), Harold (Bud Cort) makes a charm for his beloved, played by Ruth Gordon, at an amusement park. After admiring it, Maude flings it into the water “so I’ll always know where it is.” Priceless.

Once I’d secured the lock to the mesh, I threw the key into the L.A. River, symbolic of never needing to unclasp it. “So I’ll always know where it is,” I said, making sure I gave full attribution, as I am not a plagiarer.

But do you know what I am? I’m a litterer. A dirty litterer who further befouled a city already crawling with typhus and affluenza. To the mounds of garbage already clinging to the stunted river trees below, I added my own bit of non-biodegradable metal.

Especially considering what became of the relationship, I should have quoted from another classic Ruth Gordon movie, “Rosemary’s Baby” (1968, and directed by Roman Polanski whose wife, Sharon Tate, was murdered by the Manson Family the day before the LaBiancas). As Minnie Castavet, Gordon remarks that the important thing is for someone to give birth to the AntiChrist, it doesn’t matter who. “Anyone!” she says. “It didn’t have to be a no-good slut straight from the gutter. Just as long as she is young, healthy and not a virgin!” For Minnie Castavet, it’s the goal that’s important.

And, just as Rosemary temporarily endangered her baby by going off the tannis root, I should never have mingled my love with littering.

See Also: Tales from  Above the Law